Since my last post I've been away teaching.  It was our 5th anniversary, we had a lovely week (complete with cake, thank you Colleen), and spent some time remembering Sue.  A number of students had asked about a collection or flowers for Sue when I'd called to give them the news about her illness and death so during the week we took up a collection. It came to £170 and when I did the donation to Cancer Research the Gift Aid took it up to over £200.  Well worth doing if you are giving donations.  Thank you again to all the students who gave so generously. 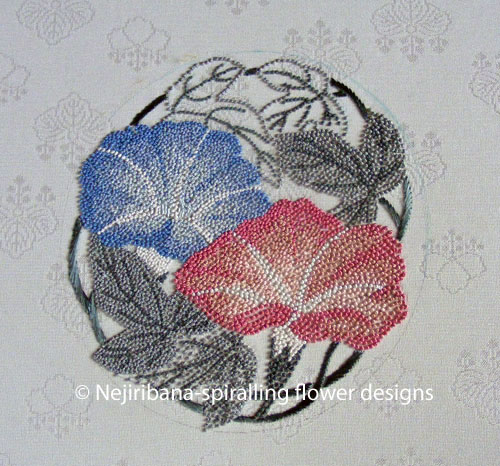 My little Morning Glory design made it's debut in class and was much admired.  I'm pleased to say that the student who wanted to do a design all in sagara nui hasn't been put off. We had a long chat and she made lots of notes.  It was then whisked off to visit the Bournemouth class which took place last week.  I think it will prove to be a popular design.

I've got a number of designs waiting to be stitched, not least of which is my next module for JEA.  The design is done and I've done the stitch transfer. Questions still remain about the colours so I'm still making decisions about that.  I'll blog about it over on The Fuzzy Effect when I start the embroidery.

As life gets back more or less to normal, I'm starting to put some extra items in the shop on Fuzzy Effect, one of them was this little design of morning glories.  Sadly, and surprisingly, the design hadn't sold at all. We had a bit of a chat and decided that it might be because there wasn't an embroidered version available to see. So after I got back from class onto the frame it went and now there is. I've blogged about it over on Fuzzy Effect and the design is available here.

While I think about colours for the new module I've started on an old Kurenai Kai design, it's from one of the old design portfolios. More about that in the next post.