Some of you may be aware by now, in October this year me and some of my friends and fellow stitchers visited Japan for a five day class at Studio Kusano.  We had the most wonderful time and came home both exhausted and inspired.

We learned a lot, new ways of approaching techniques, variations on novel effects, a different way of approaching our stitching and, for those of us creating our own designs, a different approach to designing.  It will take more than one post to share everything but I'm intending to post more on my shiny new website so look out for updates.  The new site is optimised for those viewing the site on different types of devices, I hope it works, let me know if there are any problems. 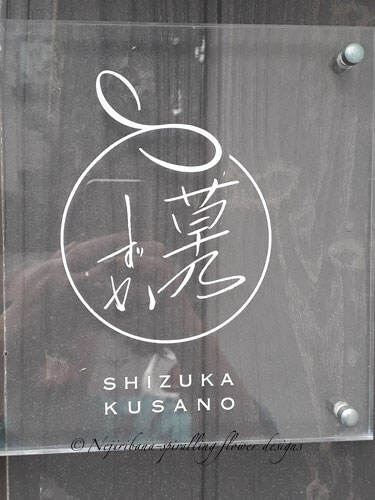 Our new friends and colleagues at the studio shared so much of their time and knowledge with us we could not have asked for more.  Well, to be able to stay forever and stitch with them every day, but sadly I had to return home and to work.  I had planned to visit more places than I actually did following the class while still in Japan but I was so tired after our days at the studio that it didn't quite work out as planned.  The humidity didn't help, it's not something we are used to in the UK and it did make me very tired. 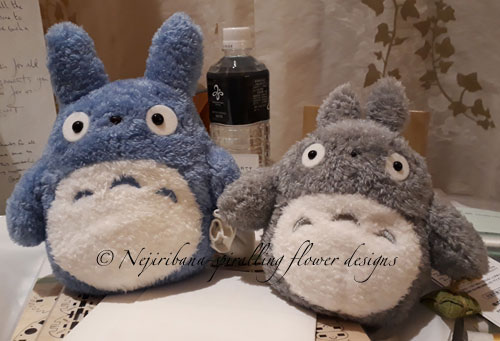 We had hoped to visit Studio Ghibli Museum, but we couldn't get tickets. But I did find these two little chaps in Tokyu Hands who followed me home.  Might have bought one or two other things there as well!!!

We started planning for the class almost two years ago and as these things do changes were made.  The original idea was that we would all stitch the same design.  However, with great generosity of spirit, Kusano sensei and her team eventually offered us three different designs and different ways of having them made up.  Of each of the three designs we had two differenc colour ways and we could choose to have them made into bags or a plain piece to be framed.

These are samples of the original motifs stitched by the studio.  During one of her talks Kusano sensei spoke about the different designs she had chosen for us.  She told us that of the many different Japanese motifs, which you will see if you have her books, these three were the most difficult.  Too late to change my mind at that point. 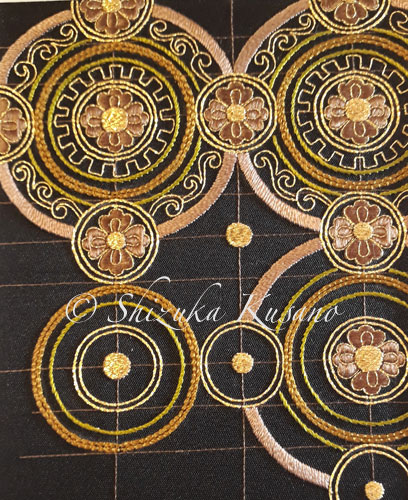 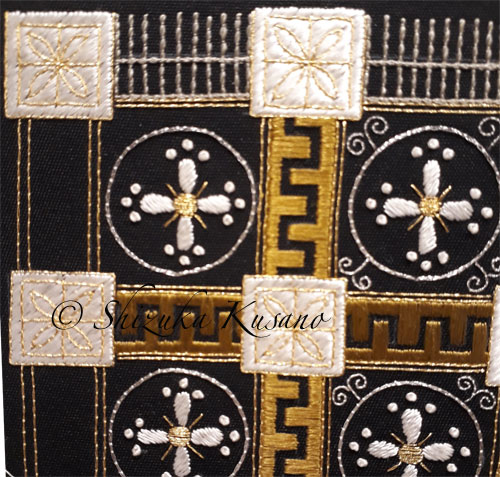 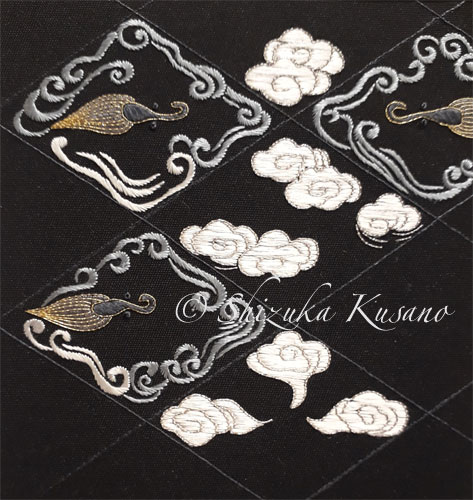 The motifs are teeny tiny, and I've always struggled with small motifs.  I decided that I should take advantage of the knowledge and skills available at the studio to improve this side of my embroidery.

Our pieces were sent to us in advance of the class so we could do the preparation work.  On my design all the lines had to be transferred but only some of them stitch transferred.  The reason for this became clear as the days went on. 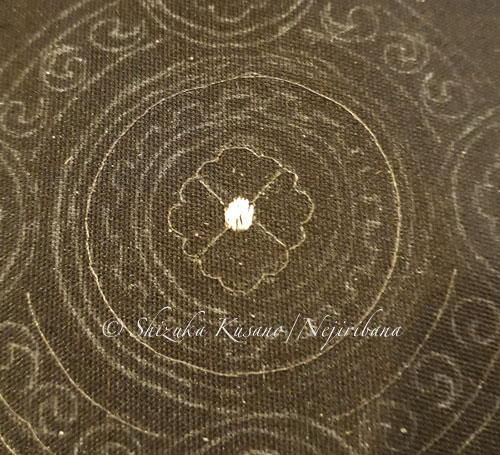 I started with one of the many many centre flowers of the circular design. 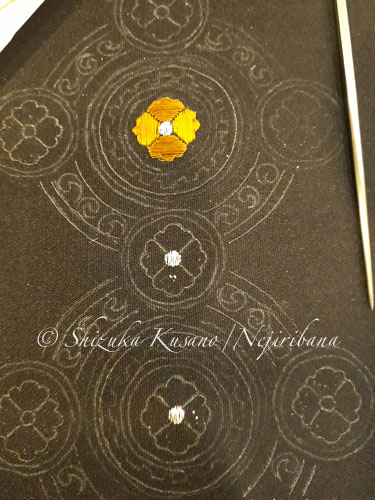 Although we jumped around a lot in class from section to section this was only to make sure that we'd done enough to continue at home. The advice from Sensei was that all the same elements of a design should be stitched at the same time if at all possible to give better continuity of stitching.  This did relate to the technical side of stitching but it was more to do with the feeling behind our work  Over the years I have come to realise that I naturally stitch this way, I judge my work not by technical perfection but by how it 'feels' in my hands and heart.  I had always thought of the work of Kusano sensei was produced to be technically perfect, I was much heartened to discover that this was not correct.  Of course the work produced by the studio is technically excellent, but it's nice to know that heart and soul play a even greater part in the production of such beautiful work. 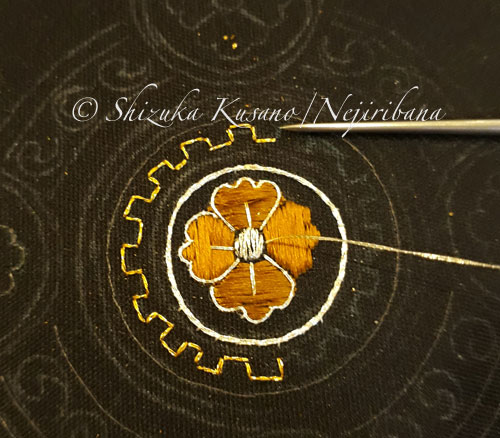 Measuring sections to get stitches straight and/or the same length also came under fire.  Here again the 'feel' of the stitching is more important.  Leaning to judge these things by eye was the order of the day.  Of course, once you've been doing this for a while (years?) your 'eye' will improve and the and it will naturally become more accurate.  Time to put away those rulers, mostly. 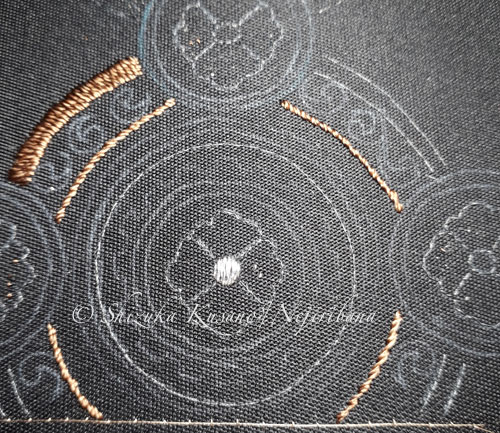 Line of staggered diagonals.  Although the basic stitch is the same as that taught by JEC, there is a slight variation here. The right to left diagonal is the same, as is how you overlap the stitches, as is clockwise direction.  The change comes in stitching direction, it is not always towards yourself.   In the variation learned in class the stitching direction changes so your needle goes down into the fabric at the end of the stitch not next to the previous stitch, so sometimes this will be towards yourself but sometimes it won't.  How does this help, it's much easier to judge and control the length of your stitches  so is much easier to get a nice line.  I shared this with some of our students in class last week who found it very easy to work this way.   I also discovered why not all the lines needed to be stitch transferred, it's easier to correct or change a line if you don't have a stitch transfer to get in the way. Again, learning to judge these things by 'feel' and eye. 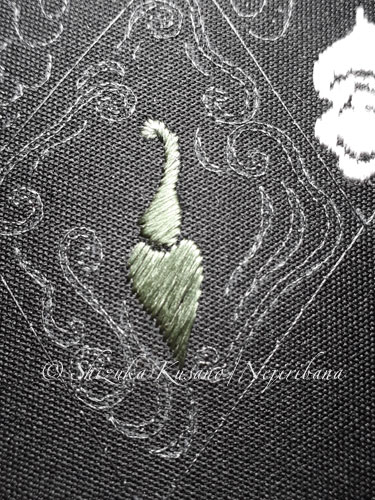 This motif represents a dragon's head surrounded by wisps of cloud. 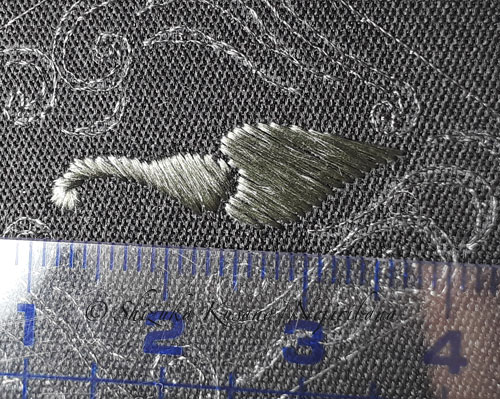 The cm measure shows how small the dragon head is.  His nose is towards the left, the wide section at the right is his mane. 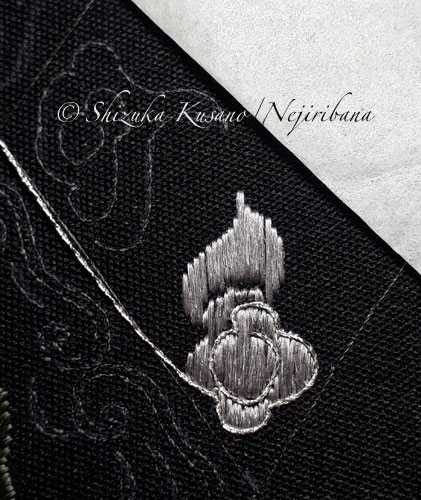 Larger clouds are in the other sections of this part of the design.  Well, I say larger, they are about 1.5sm long. A slight variation here in foundation.  This was changed from when the sample of this design was stitched, which just goes to show that no matter how long you've been doing Japanese embroidery there are always new ways to improve.

Rather than embroider a solid foundation it is worked from the centre round the motif to the outside, going up to the stitch transfer, this leaves tiny gaps in the foundation where the stitches join. 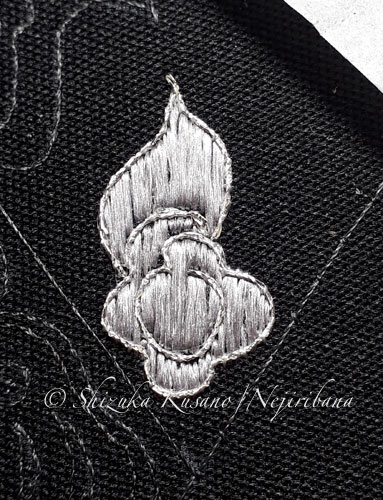 Tackling the wisps of cloud was interesting.  Using the same idea as for line of staggered diagonals, stitching direction changed depending on the direction of the curve.  I still worked clockwise and right to left diagonal, but changed my stitch direction so the needle went into the fabric at the end of the stitch, not next to the previous stitch.  These tiny little motifs were still fiddly but it was amazing how this small change made things easier. 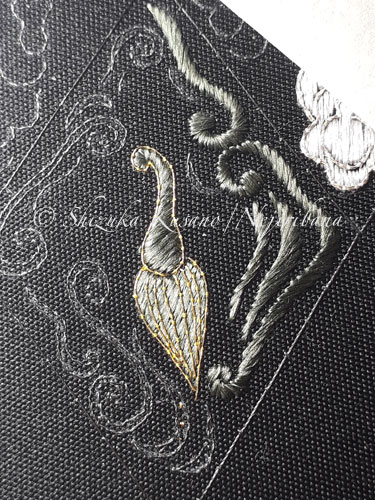 One fail in class was French knots.  Kusano sensei does knots as French knots rather than the way in the textbook.  Doing them this ways means they don't have to stop and make a different twist.  Could I make them work, no I couldn't.  They were also tightened by using your right hand under the frame.  Couldn't do it!  I'm going to stick to the way I know, at least I can get nice knots that way.