Time for an update on a new design for the Japanese Embroidery Academy.  This design was inspired by an obi I saw in Ichiroya back in 2013.  It consisted of a small noshi covered with circles of various coloured metallics.  It also had some solid areas using a katayori and metallic couched as a pair.  I kept the image in my ideas folder but didn't do anything with it because at the time we had only gold and silver #3 and 4 metallics.  Although there were plenty of colours in the stitchable threads this wouldn't have given the correct finish.

Fast forward a number of years and our access to lots of different colours of the larger couchable metallics.

The idea with this is for the students to be able to use metallics, gold leaf, and/or mother of pearl and to play with colours without using silk threads. 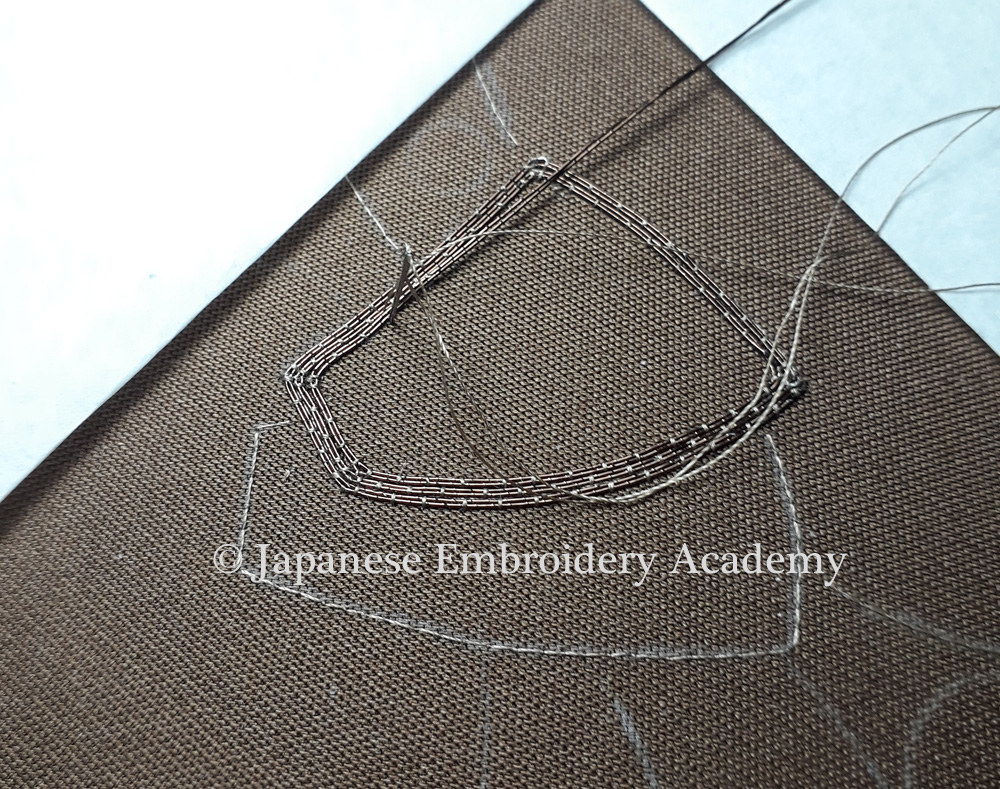 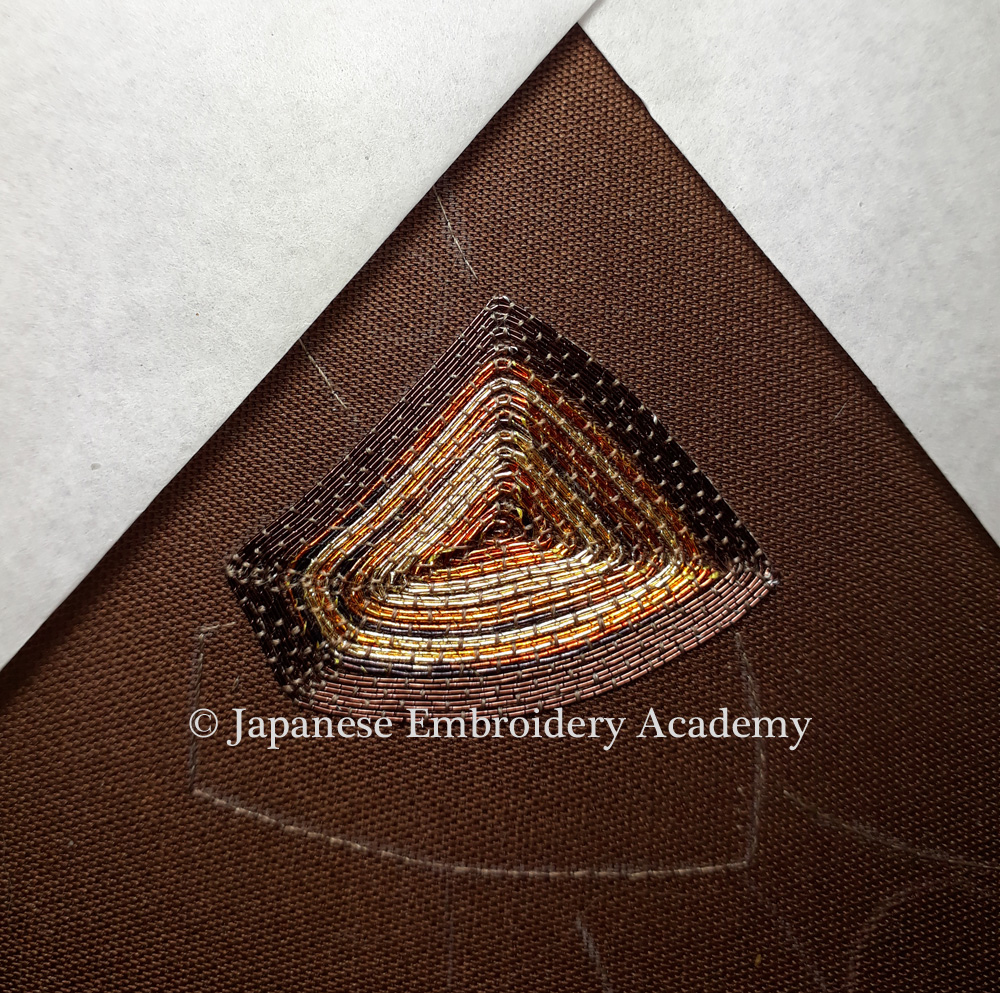 The centre of the knot on the noshi was a mix of dark brown and varigated gold. 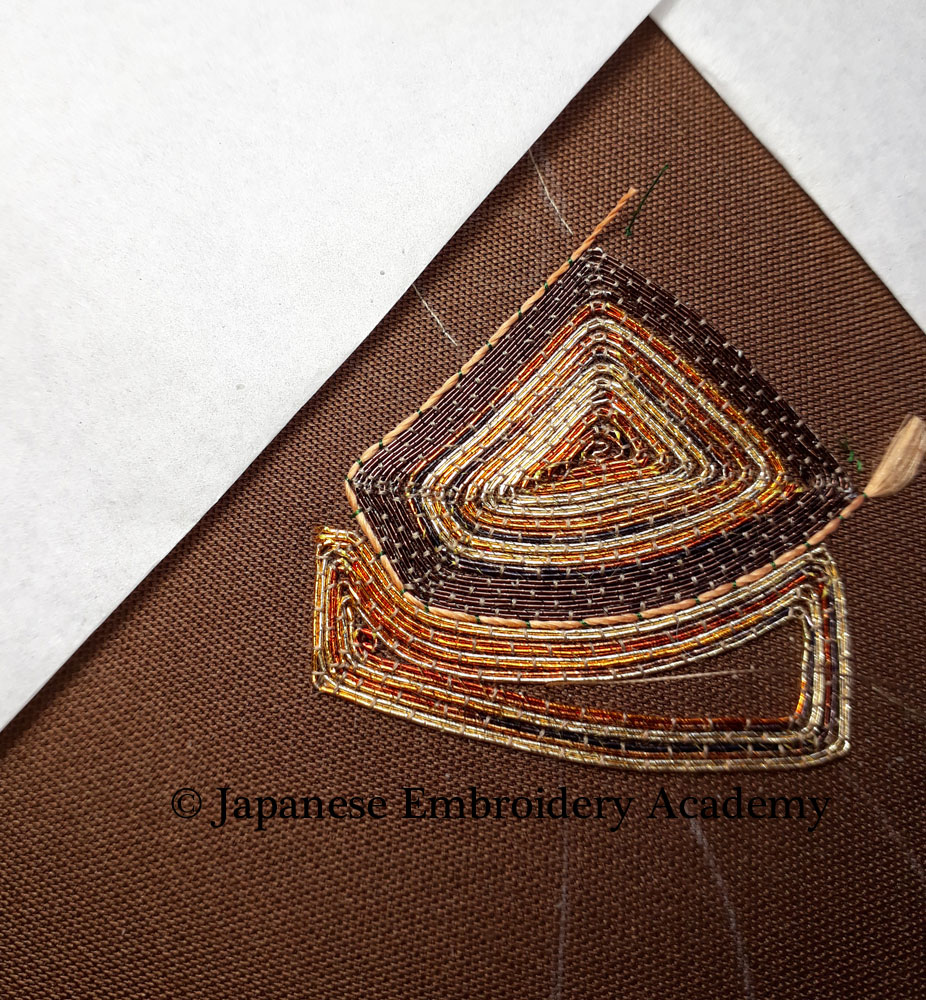 For the second section of the knot I used removable spacer thread and then worked round and round with the same variegated metallic.  In the end this second section came out because I didn't like the effect.  The final version just has an outline. 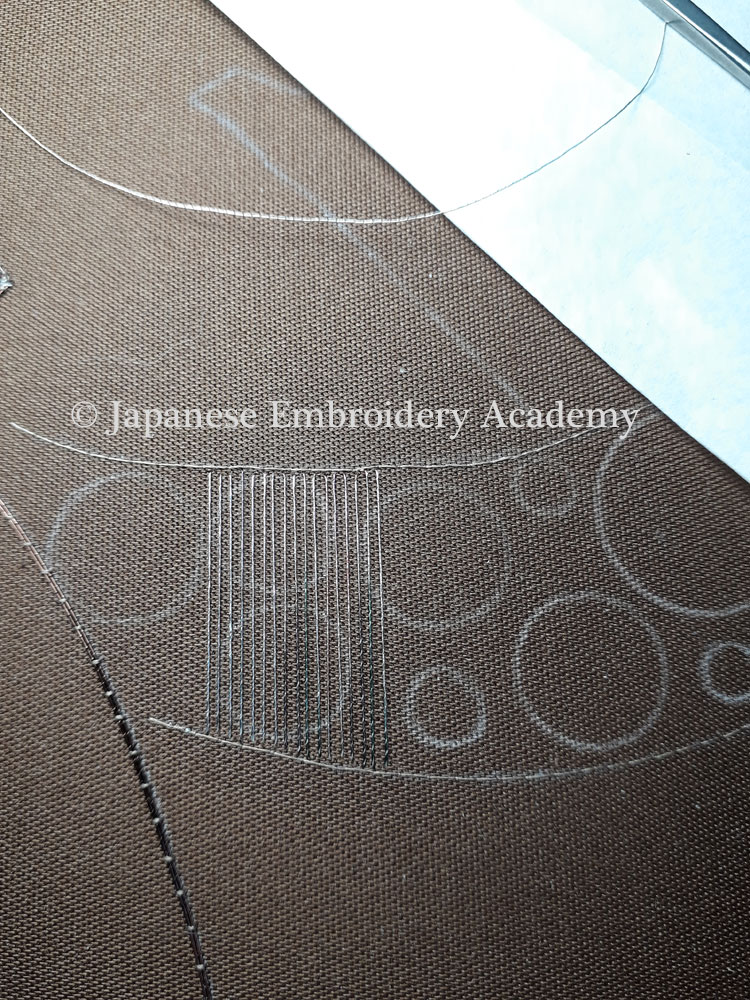 This peice of the noshi uses a variation of fuzzy effect.  I've seen variations where the fuzzy goes over a solid motif and I wondered about using the fuzzy effect to create a specific shape.  I drew various sizes of circles with a disappearing pencil then put the first layer of fuzzy over the top.  The fabric is an obi lining so is very smooth, which meant the fuzzy lines had to be measured.  I used a variegated #2. 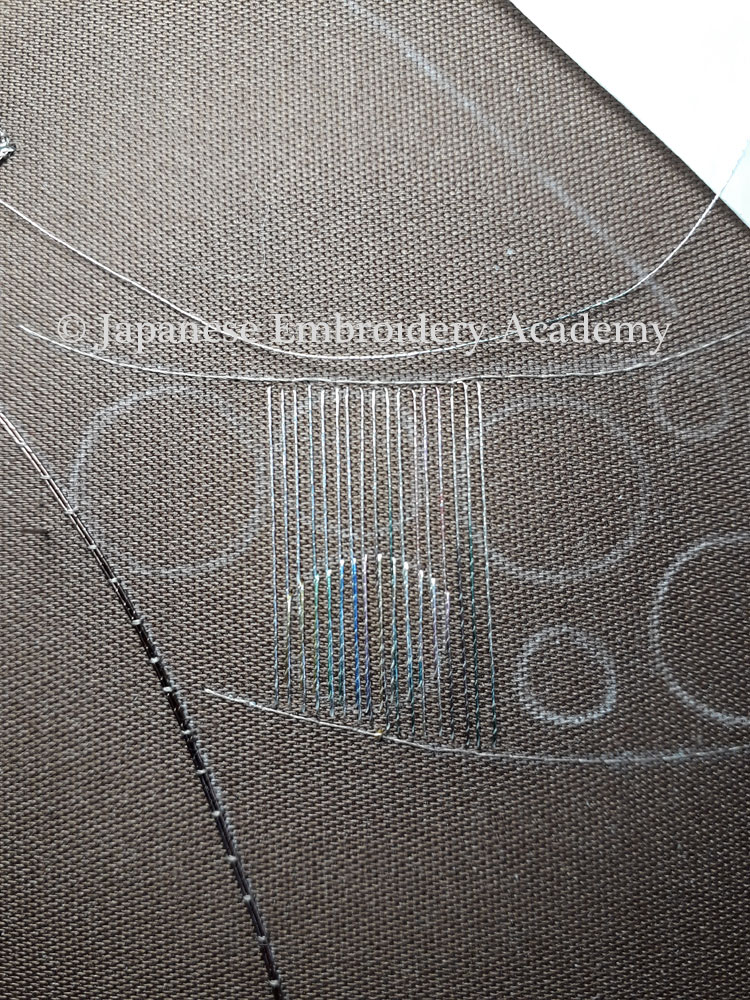 Then, to create a circle in fuzzy I put a diagonal holding stich only across the full shape of the circle rather than along the full length of the foundation. 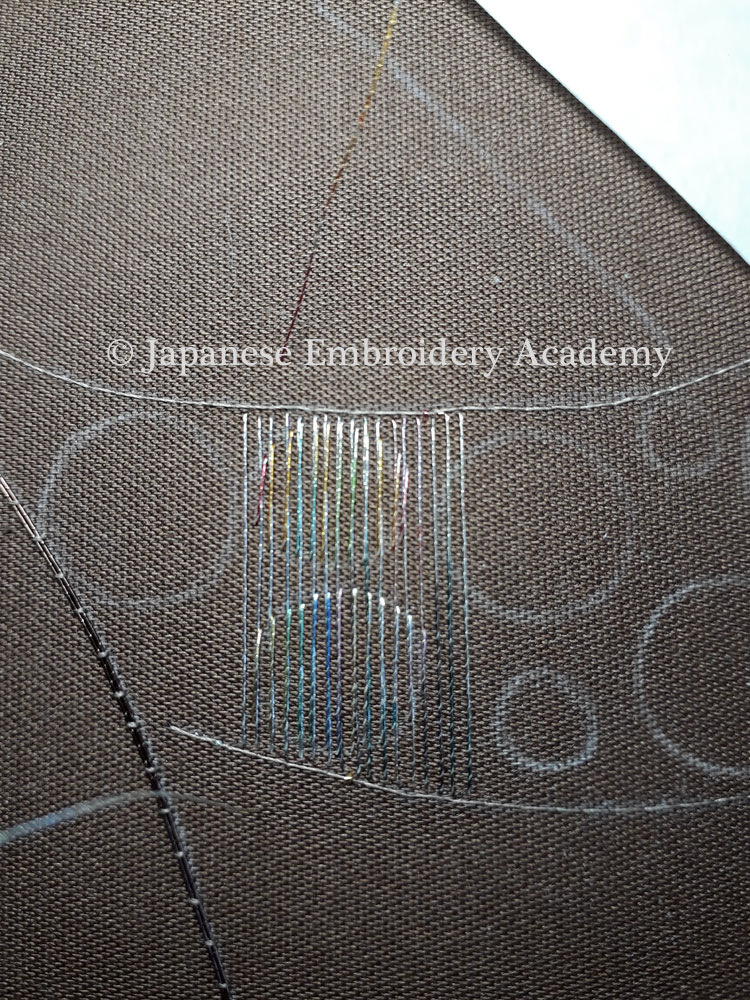 Because this was a new idea I wasn't entirely sure how this would work so I only did this section to start with. 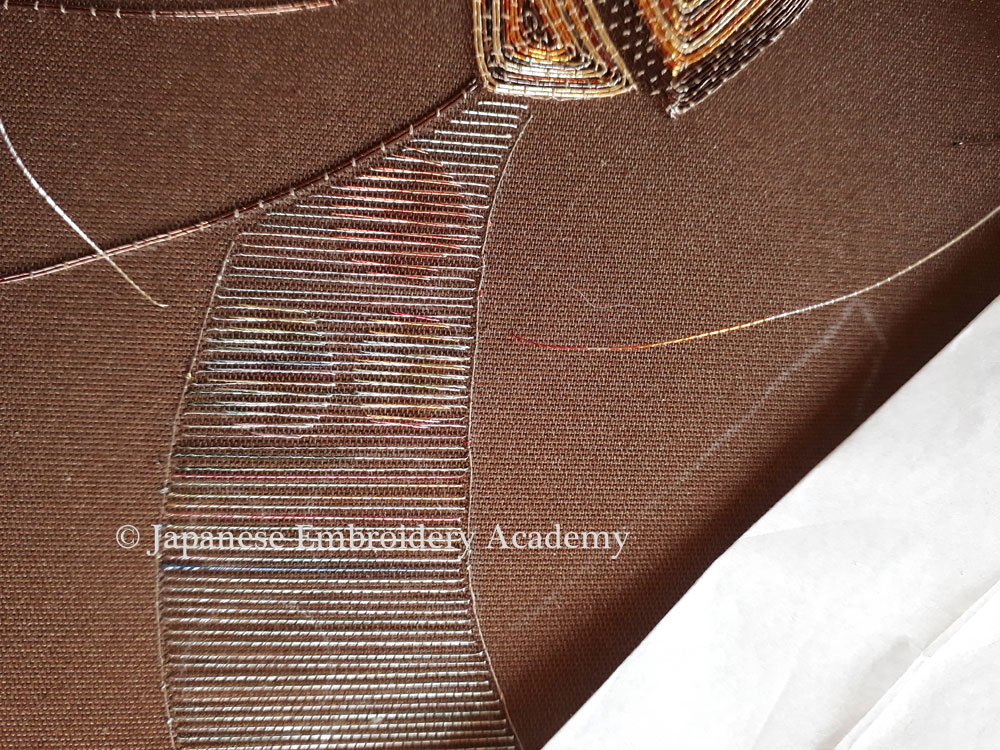 I really like the effect it gives.  You can see the circles but they come and go as you view them from different angles.  The variegated colour is lovely as well. 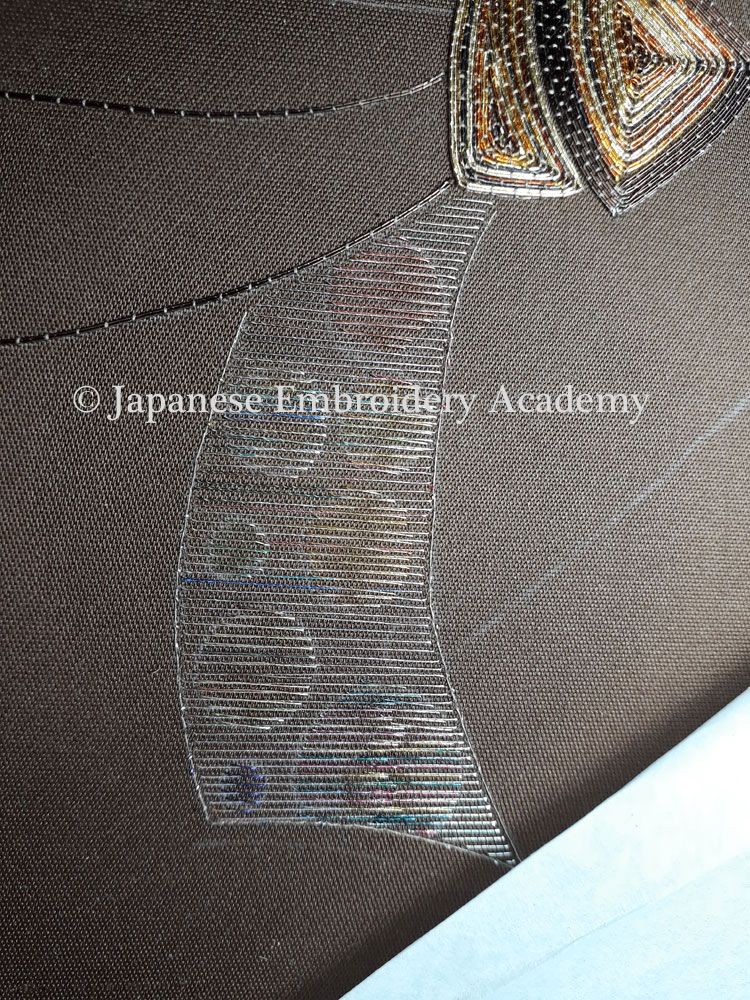 On the larger circles, I did have to put two or more stitches across in order to complete the shape, but I quite like the effect this has given as well.  Will definitely try something like this again. 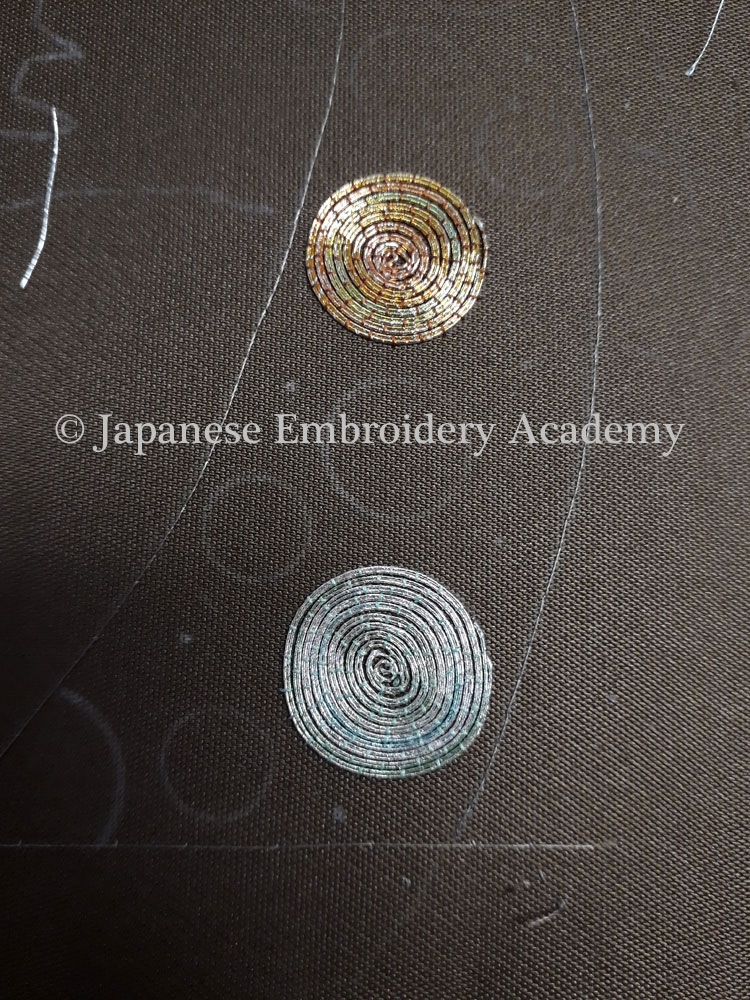 Then it was onto the metallic circles.  I drew random circles within the noshi and put in some dots as well.  The circles were stitched using inward spiral, the dots outward spiral, and the colours chosen randomly. 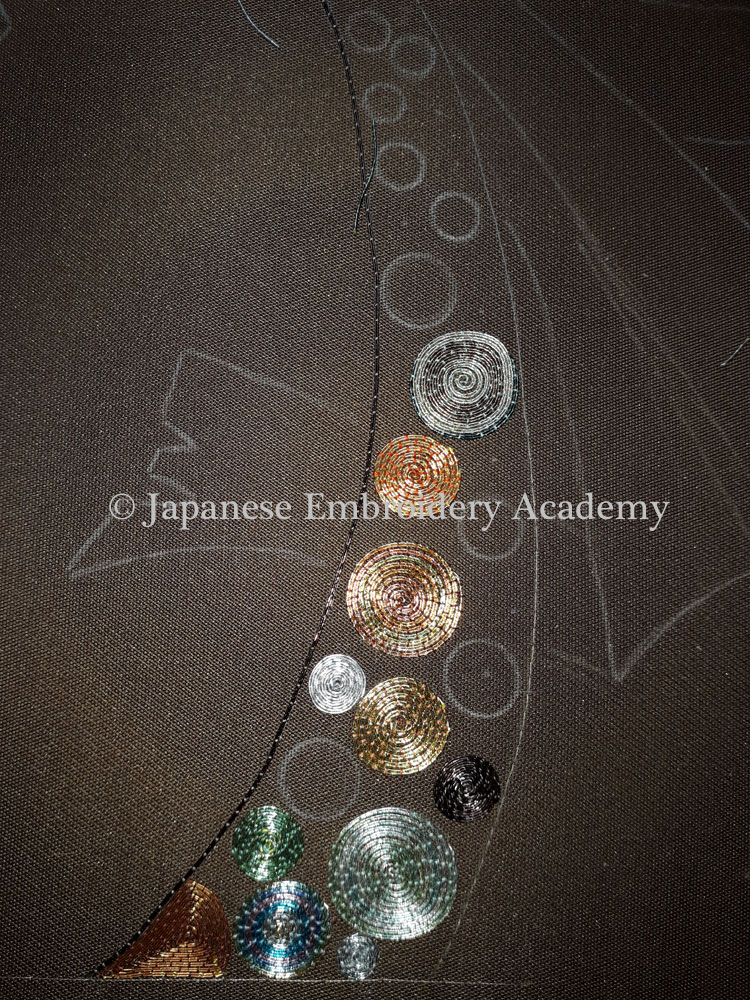 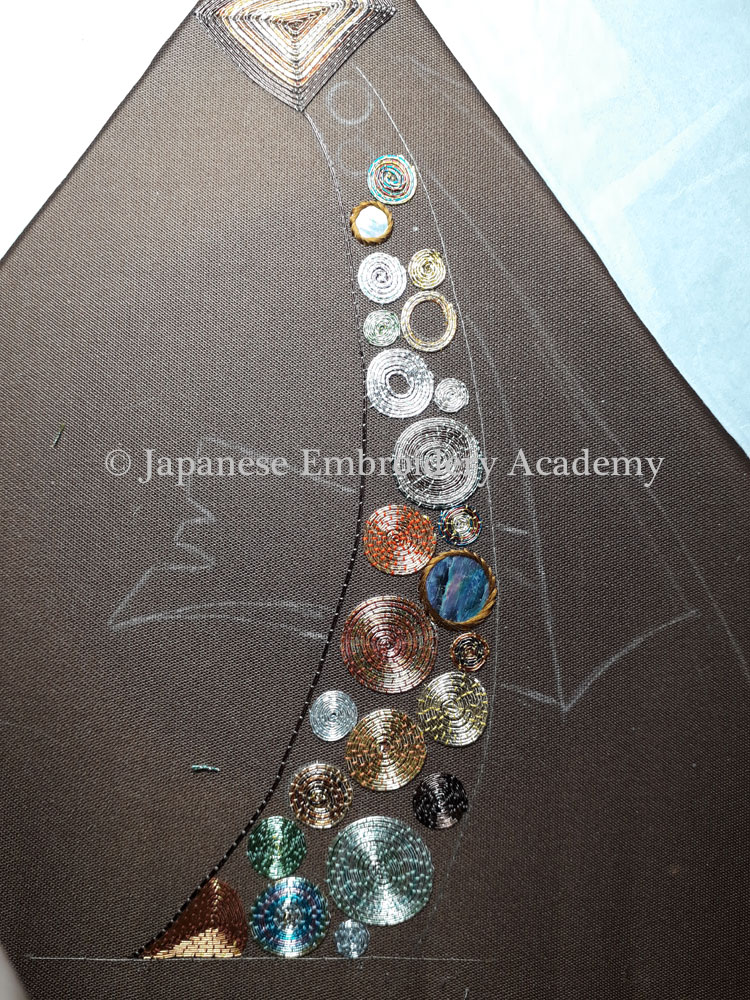 I altered some of the sizes of circles as I went and also put in a couple of incomplete circles. 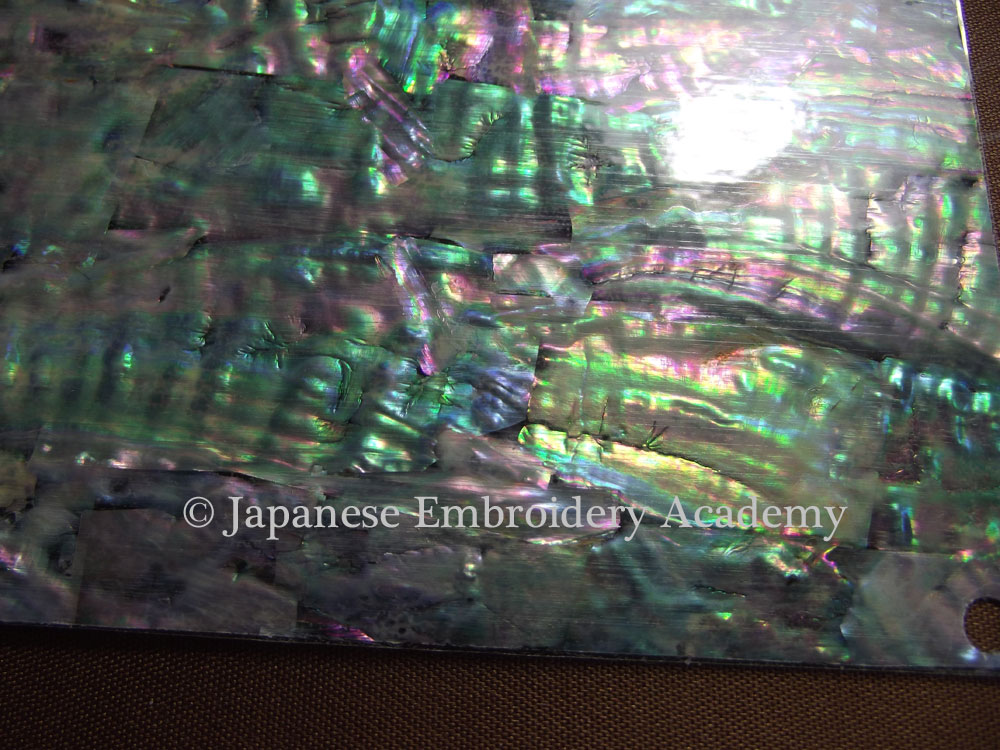 I hadn't originally considered including mother of pearl but once I thought about it I decided it would work well.  I have various colours so chose this lovely purple and green version which I though would go with the colours already used.  The mother of pearl has a sticky back but it still needs an edgeing of some kind to help hold it down and to hide the cut edge.  In the end I put in straight stitches in brown silk around the edge which worked well. 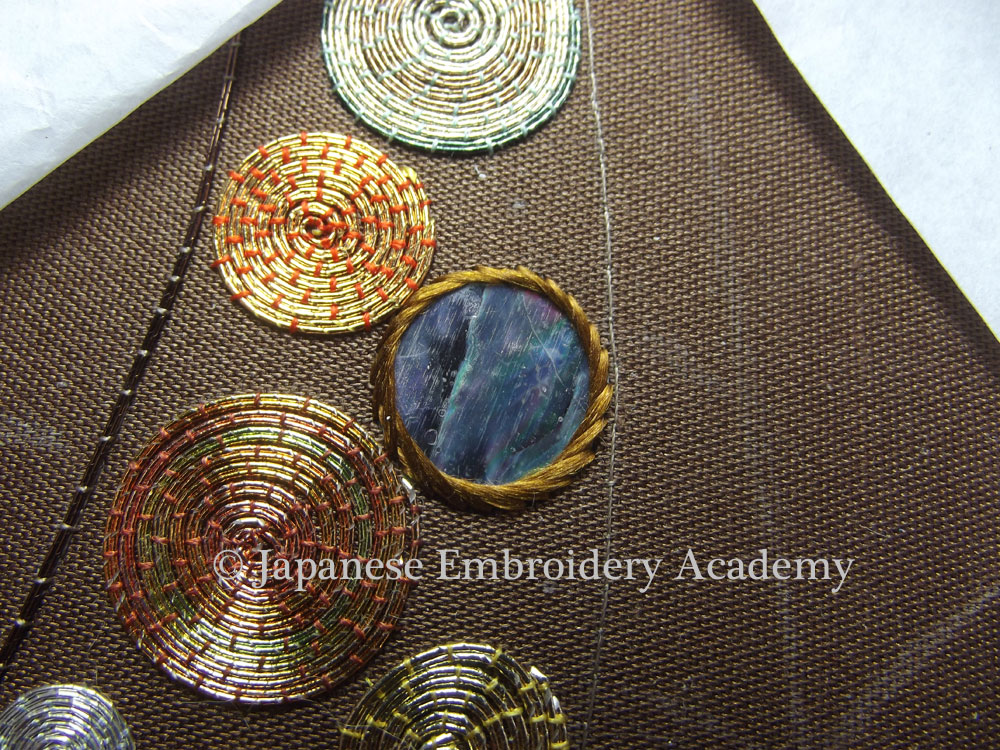 Originally I outlined the noshi with a pair of the dark brown used for the knot.  But it didn't give a defined enough edge so took it out and replaced it with the variegated gold also used in the knot.  It's a much thicker thread and works much better.   So here it completed.  Well almost, I need to do a couple of tweaks, but they are just to tidy up a couple of lines. 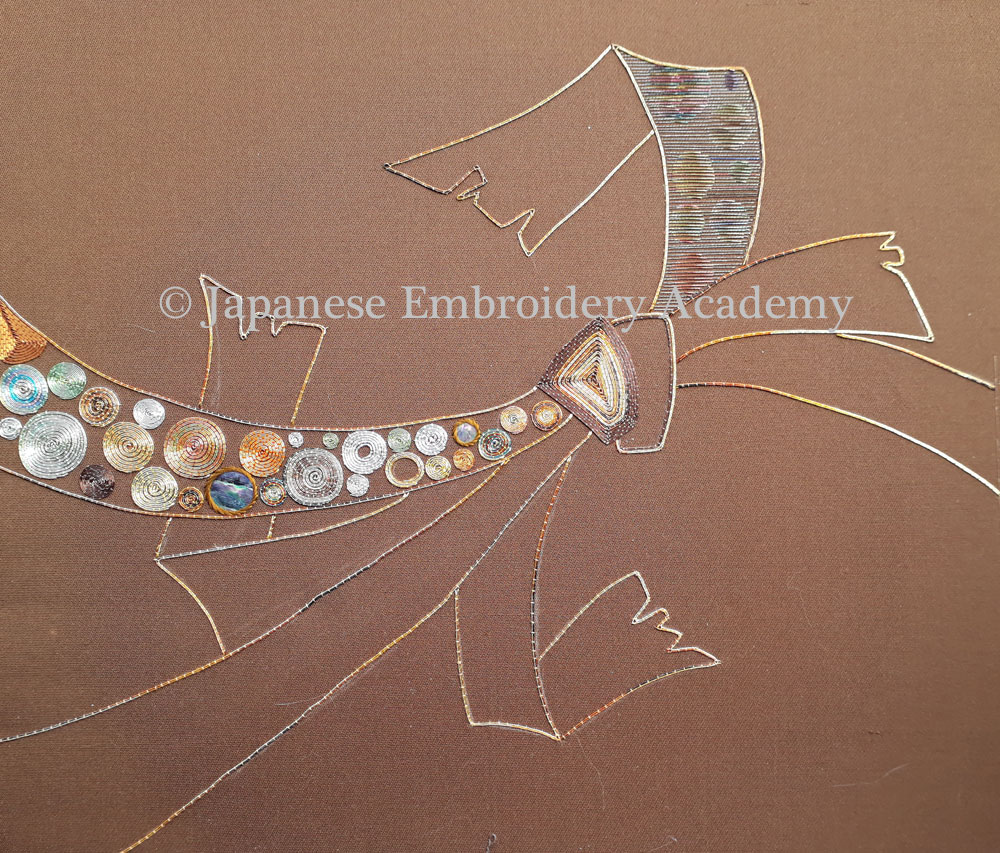 It was going to be ready to show to students in our April class but since we've had to cancel the class it'll make its debut in November instead.

Hope everyone is keeping well.