The most important news since my last post is about my two new housemates, Flash and Persia.  It's been about 8 years since I last had cats and they had been with me for so long that I really couldn't bear the idea of getting more for ages.

Recently I've made some visits to the local animal shelters looking for adult cats and last Sunday I met these two at Millstream Animal Shelter.  Their previous owners were not able to keep them so they needed a new home together and I decided that they could come and live with me.  They are still settling in but are doing very well and, as you can see have been helping out when I've been working from home. 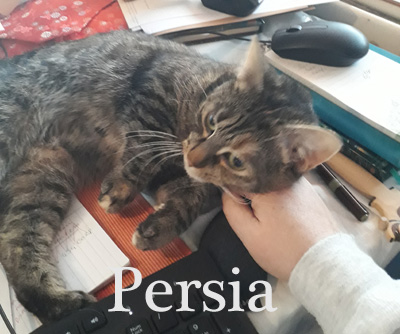 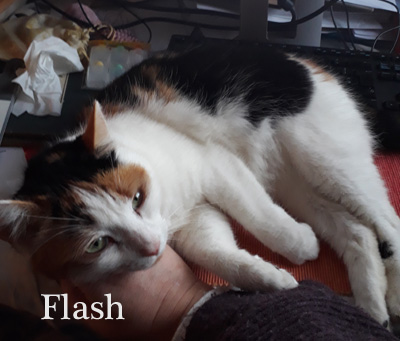 No idea why the names Flash and Persia were chosen but, at 4 years old, they are used to the names so I will probably stick with them.  Millstream have a Facebook page here

In other news, Japanese Embroidery UK have changed our name to Japanese Embroidery Academy (JEA) and now have Facebook page.  As new people became interested in JE and joined the existing groups on Facebook it became clear that not everyone knew the difference between JEUK and the Japanese Embroidery Center (JEC).  Although we've posted messages in the various groups explaining that we are separate from JEC those messages gradually move down the list and new members don't always see them.  We hope to use the page to showcase designs and to let people know about updates when we have them.  We would also like students to post pictures of their JEA modules or challenge designs.  You can find our JEA Facebook page here, we'd like it if you'd like the page!

Which brings me onto part 3 of this post.  JEA, module 8, fuzzy effect.  When we were designing our teaching modules for JEA the decision was made that we'd have a minimum of two designs for each.  I was given the task of designing module 8 using fuzzy effect.  Module 8.1 is Maplefall. 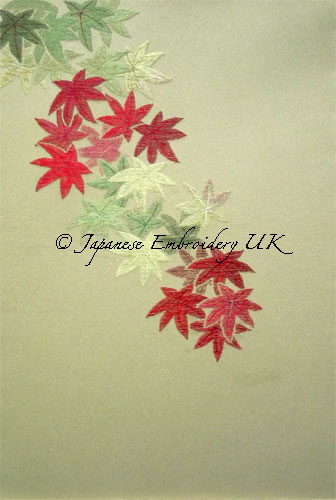 Module 8.2 is a lotus.  It has taken much longer to get this one anywhere near finished than the first design. I've made quite a lot of progress and am hoping to complete it soon.  I did quite a lot of work on it before I had to put it aside to do the prep work for the Studio Kusano class design.   I've only mentioned it in passing before so time for a better update. 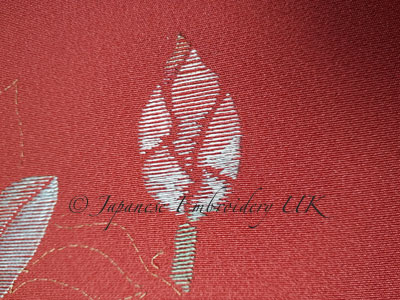 My original idea for the design was a white lotus glowing on a coral background.  The idea looked great in my head but once I put silk on fabric it just didn't work.  The white didn't stand out enough. 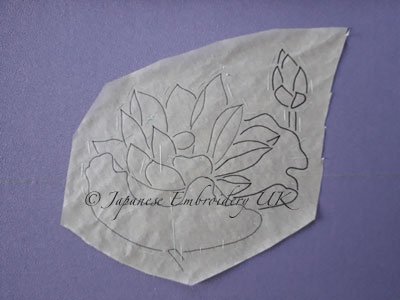 It was put aside until my next visit to my tutor, and fellow JEA designer, where we discussed colour options.  The fabric was changed to this lovely mauve which works much better.  The picture above is much closer to the actual colour, it's been very difficult to get good colour reproduction on photos of this piece. 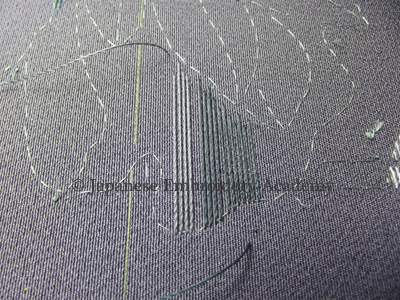 The crepe I'm using has a very fine weave and the threads have 16 suga, so a 1-1T was a bit chunky.  I did some experimentation  to figure out how many suga I needed to get a good effect. Once that was done I had another play with colour. 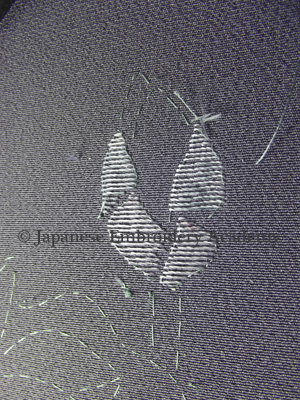 This first attempt at the bud was ok, but there wasn't enough contrast between the colours.  I removed one of the darker white shades and introduced a much darker grey/mauve which worked very well. 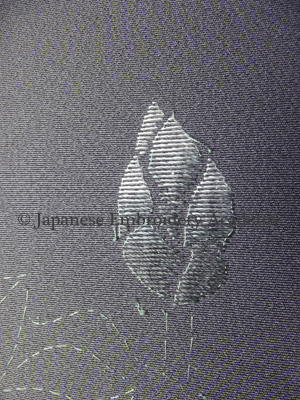 The leaf is a bit of a challenge, although I think I've cracked it now.  I just have to couch it all down. 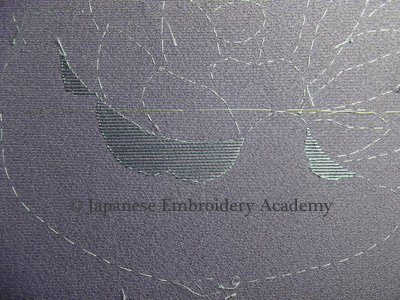 My first attempts at creating shade and shape. 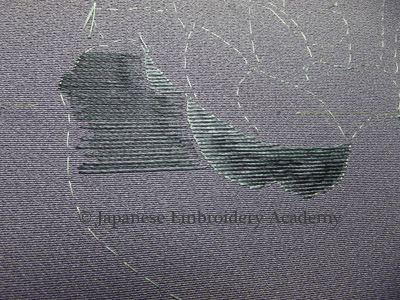 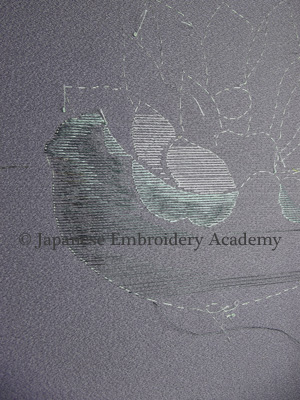 I didn't like the result, it was too haphazard and wasn't giving a nice shape. I went back to various text books and images of fuzzy effect designs.  I noticed that in lot of the pictures there was a larger gap between the sections of the motifs and/or a much thinner thread had been used where the two sections touch. 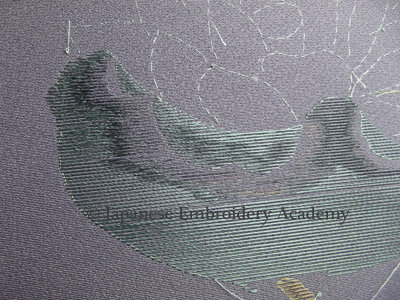 I removed what I'd done, and re-stitched it all, introducing a very fine variegated urushi thread for accents. 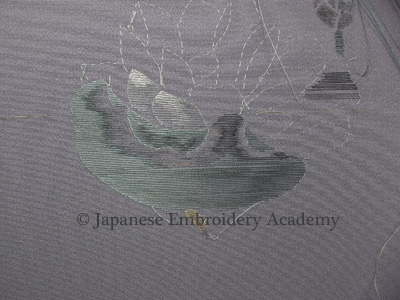 I'm really pleased with how it is looking now, just have to couch down those very long stitches across the wide part of the leaf. 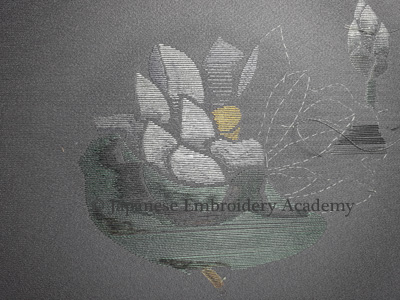 The petals are going well, though since I took this picture some have been taken out and re-worked.  I'm hoping we'll get some weekends with good light so I can do more and get it finished before too much longer.