It has been a while since I posted and although I had hoped to have more embroidery time in this strange new world it hasn't quite worked out that way.  I have been working at home since March and will continue to do so for some months to come.  While it does mean that I have no travel time, yay! no driving round the M60 twice a day, the pressure of work has meant that I've had little time for other things.  However, I am hoping that I will be able to post more regular updates from now on.

We should have had a class a couple of weeks ago but it had to be cancelled due to local and national lock down restrictions.  But, we do have new dates for May 2021.  Slightly later than our usual weeks due to lots of events being re-scheduled but it can't be helped and it will be wonderful to catch up with all our students, friends and colleagues in person.  So, May 6-9 2021 for the Japanese Embroidery Academy UK (JEA UK) classes in Garstang.  Dates for Alton are to be confirmed.

After completing the most recent design for JEA UK I moved onto a new design.  My very long wisteria design is still in progress.  I've posted some details of this on Instagram - @atelier_nejiribana - and will do a blog post for it soon.  Meanwhile an update on what I'm currently calling, Ignore the background.  I was given the beautiful kimono silk below by a friend of mine.  I wanted to use it for an embroidery but for ages I couldn't decide how to use it because of the strong pattern.  I then saw a beautiful embroidered butterfly worked in cords by @noreen_tokyo on Instagram.  The blues and yellows of the butterfly were in complete contrast to the background of pink and white.  I really enjoy cords and have a portfolio of these types of designs which are on the list to embroider, so, I wondered, could I do something similar?  Ignore the background, or at least use a contrasting style and colour scheme between the kimono silk and embroidery?

It's a bit of an experiment as I have no idea if it will work out but that is part of the joy and excitement of designing my own pieces.  I dug out the portfolio to find a suitable design, finally choosing one which I thought was the most in contrast to the straight lines and diamond shapes of the fabric.  Lots of swirls of water, leaves and a small butterfly, not a straight line to be seen. 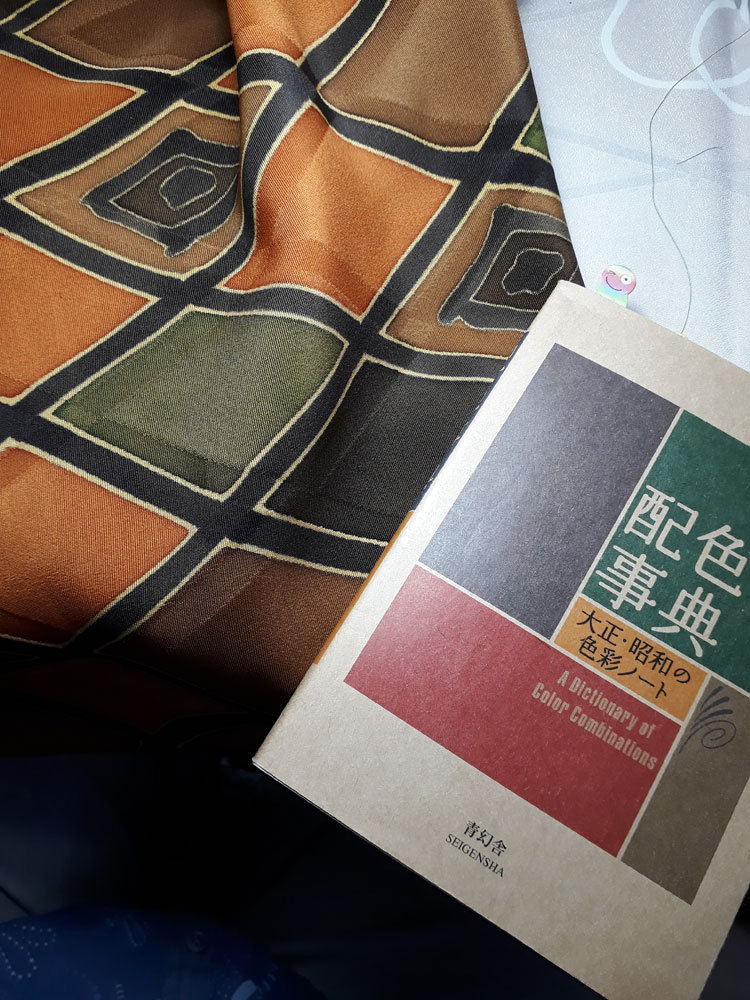 For colour inspiration I went to my Dictionary of Colour Combinations.  First I chose random combinations that I liked but deliberately staying away from anything resembling the colour of the fabric.  I then viewed these next to the fabric, finally settling on the pink, yellow and grey scheme below. 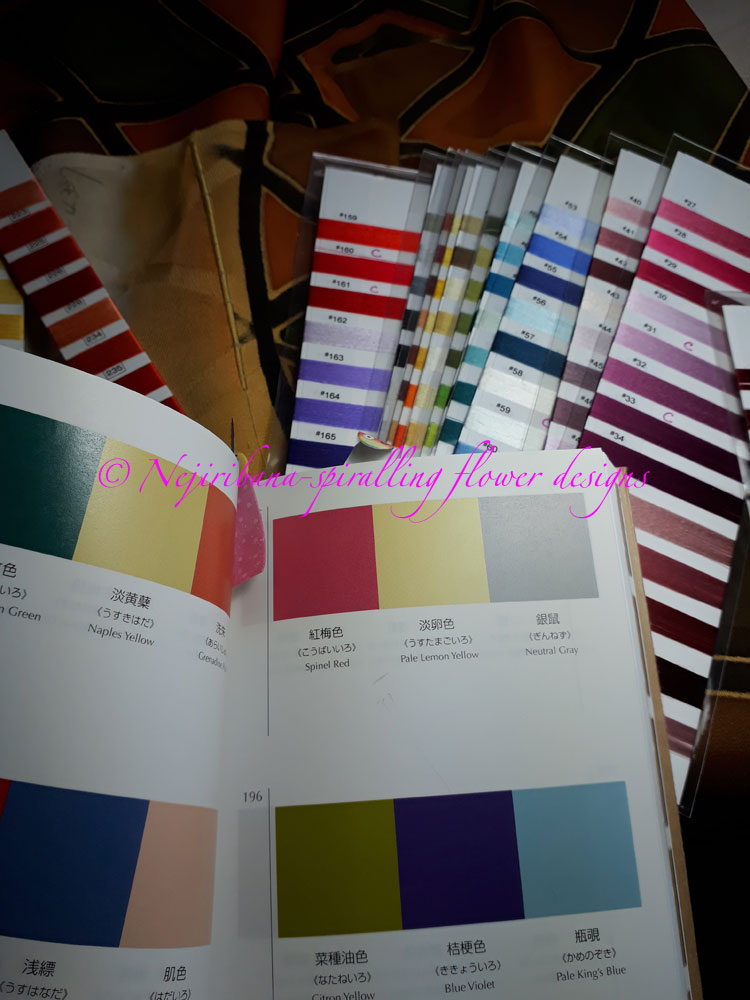 Unlike painters who can create an infinite variation of colour, or those embroiderers who are lucky enough to be able to dye their own threads I have to work with the colours of threads available.  So the next task was to sort through the 3 different sets of threads I have (JEC, Midori Matsushima, Studio Kusano) to find the ones which most closely fitted the colour scheme in the book. 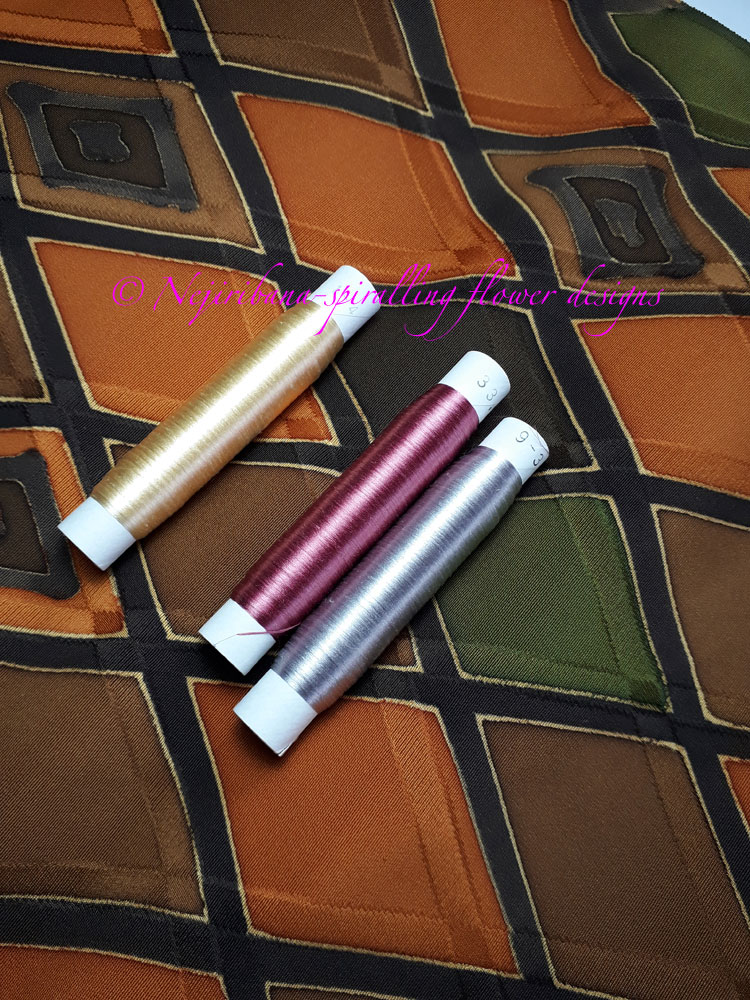 After some swapping and changing I settled on these colours from the Studio Kusano range. 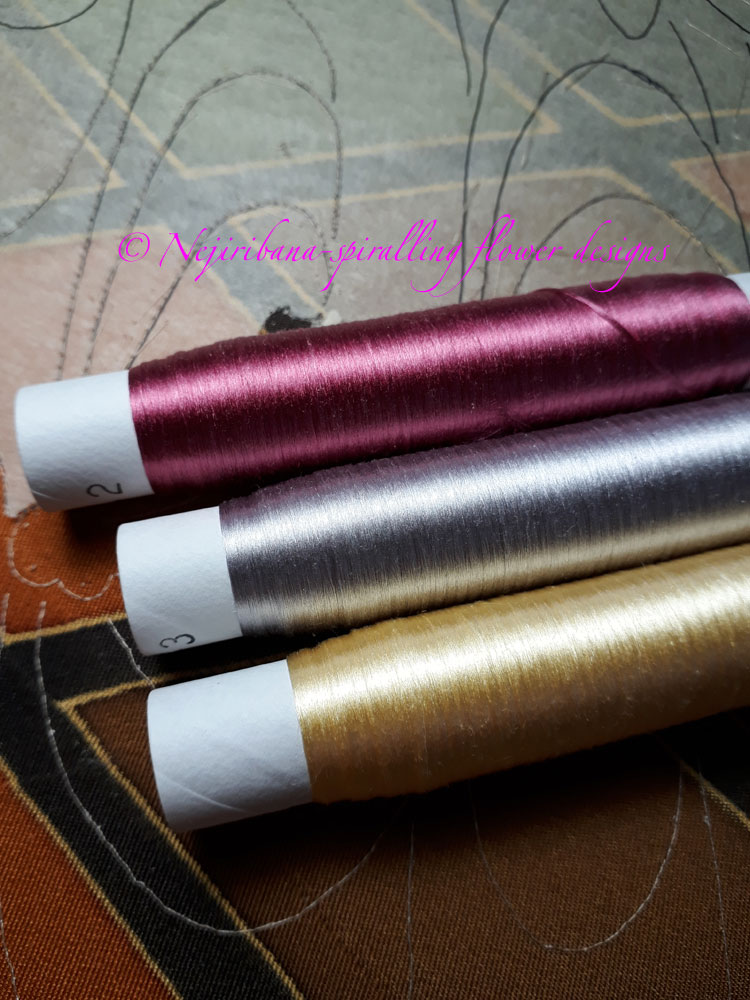 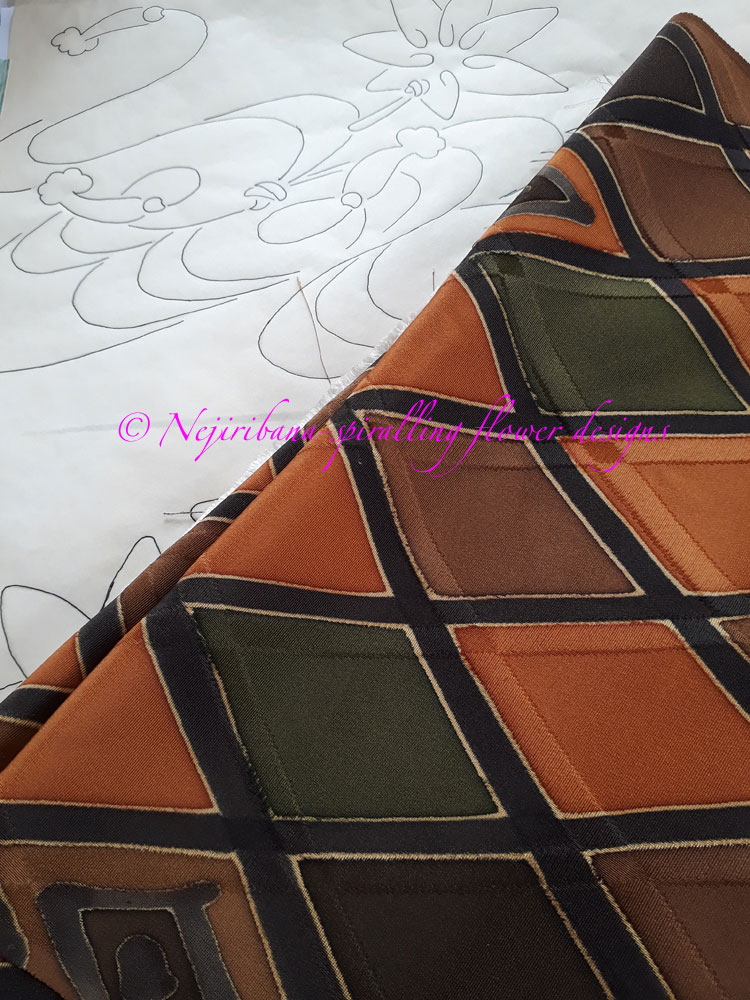 Onto the stitch transfer in line of held thread, so boring! 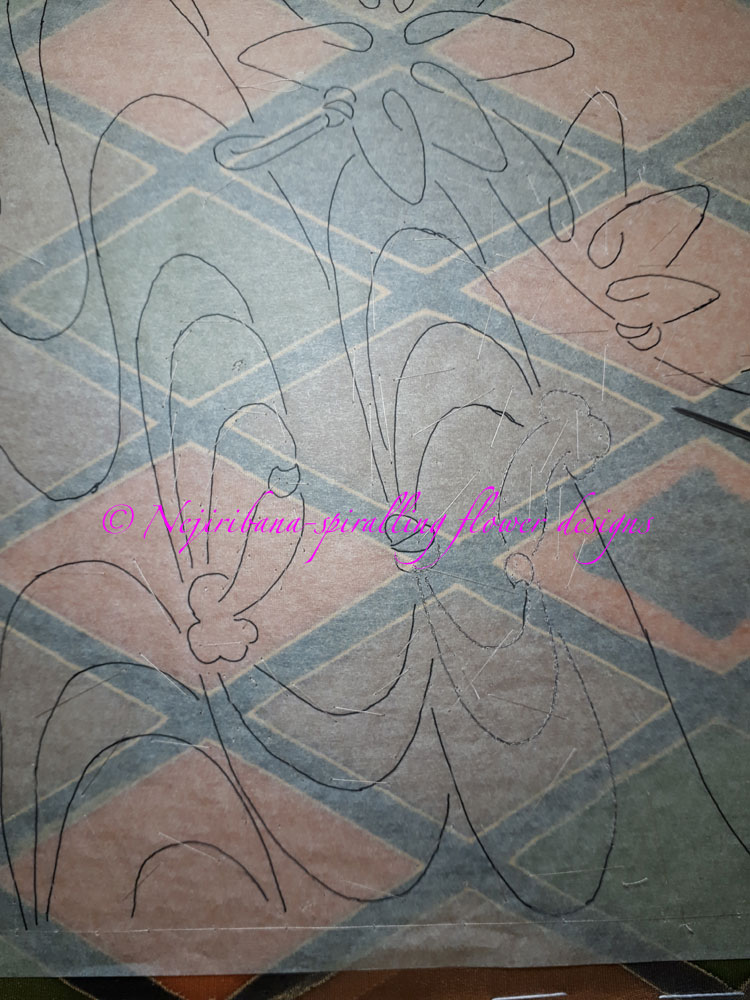 I completed quite a lot of the transfer but really wanted to get some colour on to see how it worked. 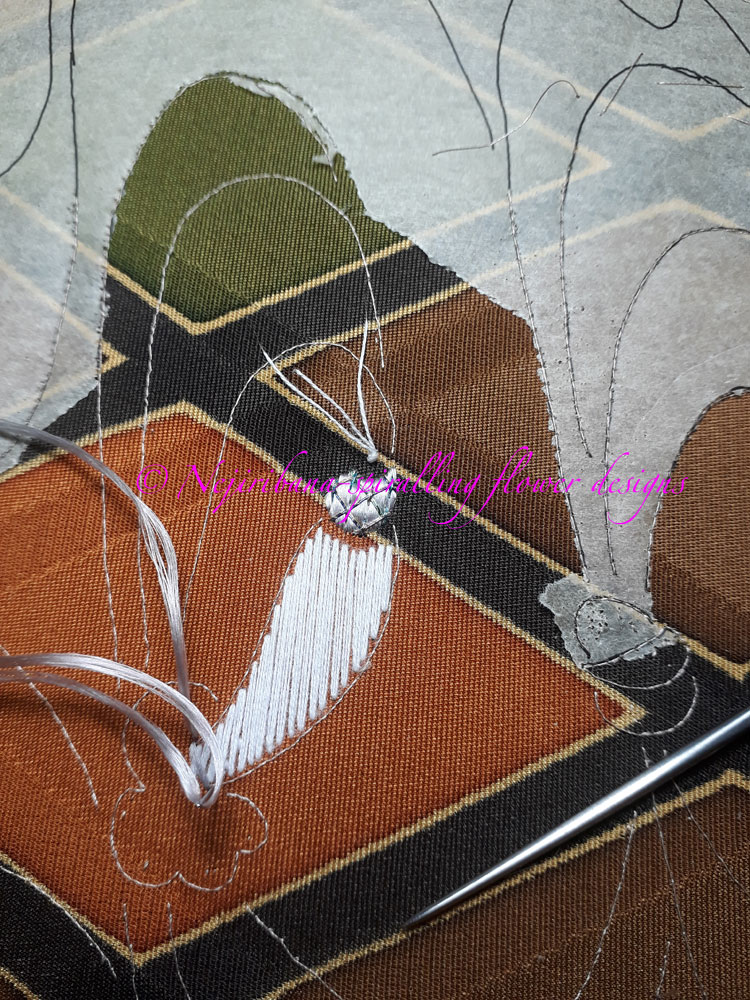 Choosing one of the tassels, I used stitched padding cotton, horizontal layer, then 2F of grey silk.  Studio Kusano silk is 10 suga so this thickness covers well but isn't too chunky.  To give movement to the tassel I started towards the bottom edge of the tassel and worked upwards gently angling the stitches as I went.  I then went back to complete the bottom section. 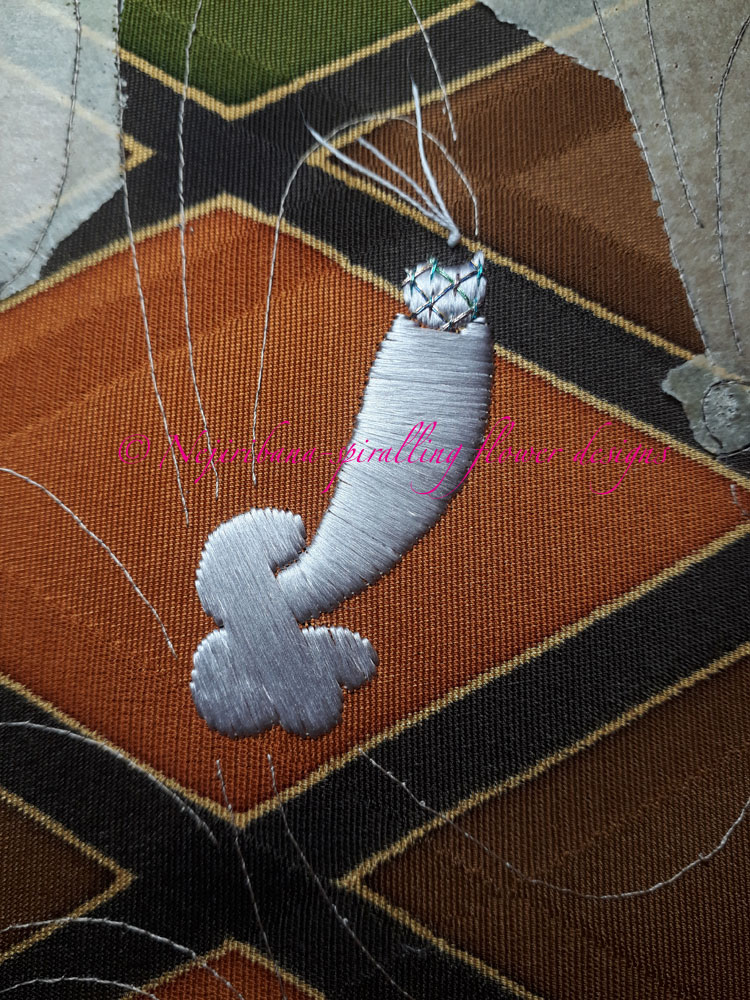 For the lines on the tassel I've used 2 strands of a #2 shell silver which contains a lot of turquoise.  I did try this first with 1 strand but it was too fine and could only really be seen close to.  Given it won't be viewed like that once completed I went with 2 strands so it was more easily seen from a distance. 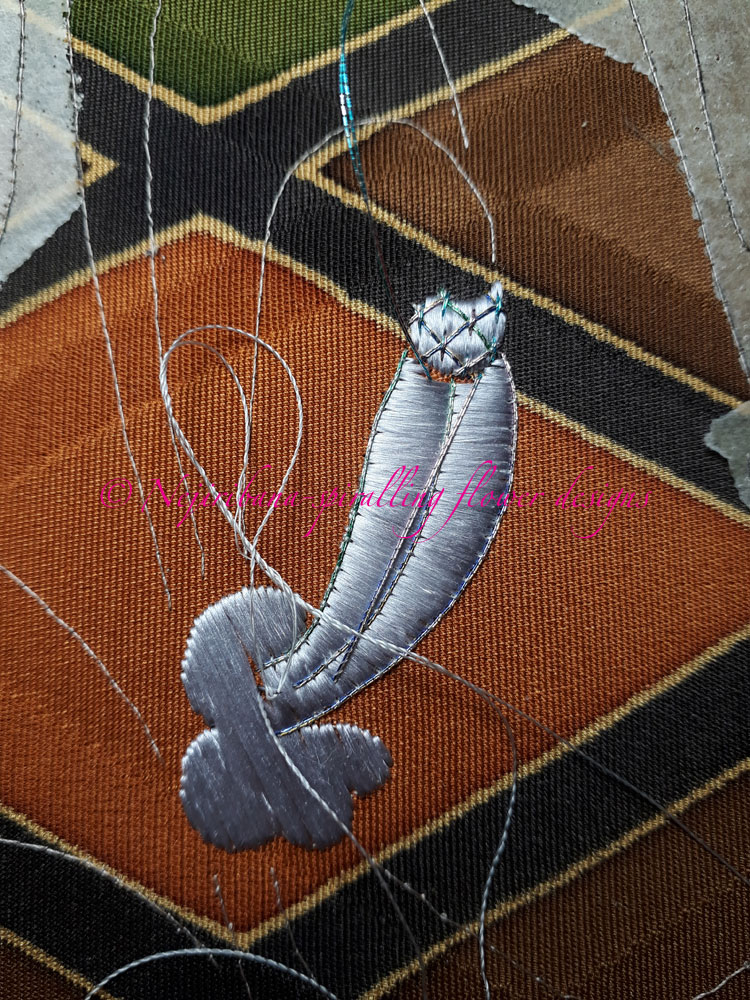 I used line of held thread technique for the lines and, following on from what I learned from our classes with Kusano sensei, I put the lines in by eye rather than using a tracing or shell powder.  Have to say I'm very pleased with the spacing and curve of these. 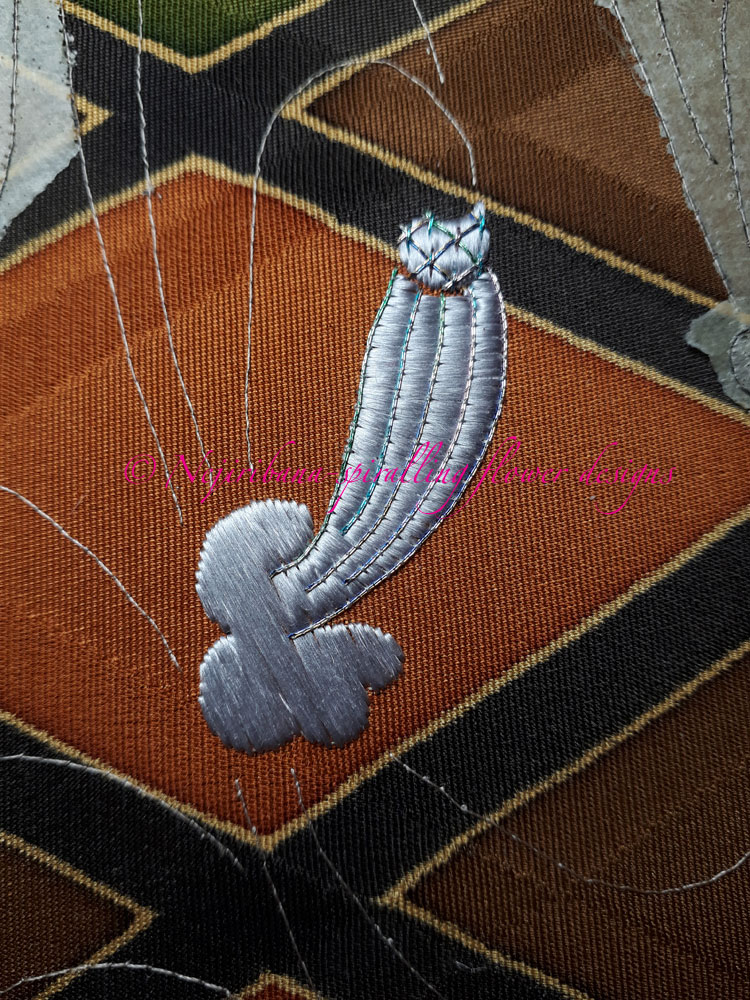 I love doing Japanese knots so just kept going until I though I'd got enough.  Again, a tip from Kusano sensei, work by what 'feels' right.  This tassel 'feels' right and I really like how the colour is working. 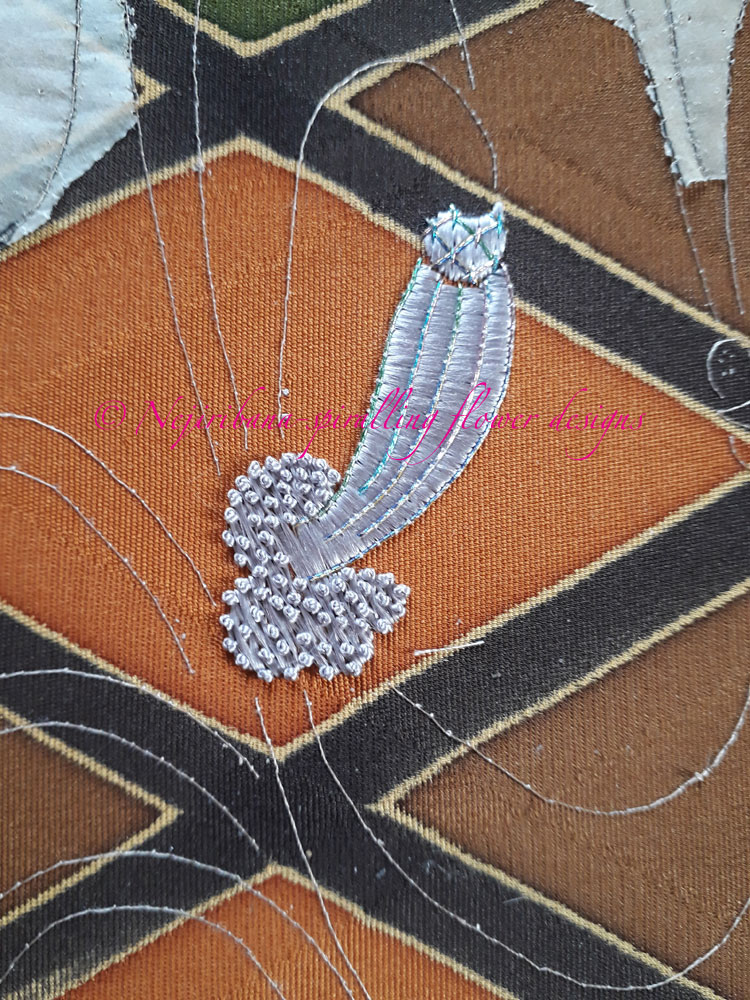 I've made a start on the cords and leaves on this piece but more of that next time.

A quick update on the shop to finish off this post.  I've scanned in more of my antique Japanese prints and design sheets to make into greeting cards which are now available to buy in the shop.  I'll also be getting them as various types of prints soon.

A large and small card (A5 and A6) from antique prints and two square cards.  One is from an antique print and the other is from one of my original embroideries, Shadow Chrysanthemums.

Off for lunch then an afternoon of embroidery