It was back in March when I last posted, it only seems a short while but here we are nearly in July.  Where is the year going?

I met the deadline for getting my hydrangea fan design to Midori for it to be sent off to Japan to be made into a fan.  It should be back in the next couple weeks. I'll share more photos then.

In the meantime here is an update on the rest of the embroidery for this design. 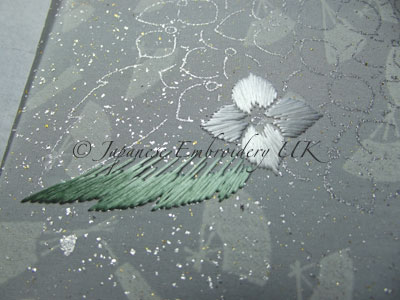 Because this design was to be made into a working fan there it was important to bear this in mind when deciding on techniques.  I hadn't planned anything particularly fancy for the embroidery, I wanted a simple but beautiful design. 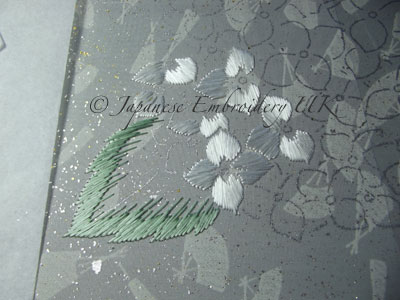 I used either 1F or .5F over the whole design.  I had originally planned to put small knots in the centre of the individual flowers. As soon as I started the embroidery I decided I preferred the small circles from the transfer in the centres so I kept those and left out the knots. 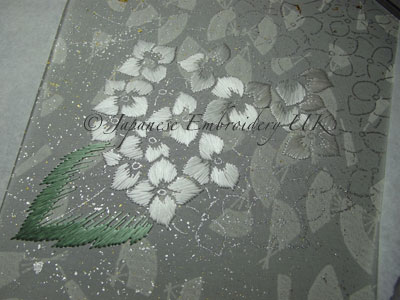 I also very quickly decided that I didn't want to completely fill in the leaves. So I put one line of 1F round the edge of the leaf, angling slightly as I went to try and emphasise the curve.  Row 2 was .5F random, but also trying to angle these to emphasise the shape of the leaf.  This was one of those moments we get occasionally in JE that it just worked.  It went in, stayed in, and looked beautiful. 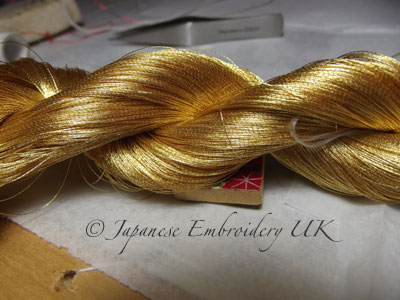 After I'd put in a few of the small hydrangea flowers I tried out some ideas for the 2nd row of embroidery.

Sometimes when I'm trying out ideas I feel like Goldilocks trying the bear's porridge.

Bowl number 1,  not quite right.  It's a beautiful colour and I thought it would pick up the gold sprinkles.  It's also very soft so it would work ok for when the fan is folded. 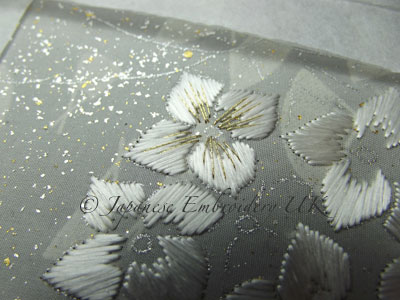 Even though it's a fine gold, less than .5 silk, it just wasn't right.  Too hard. 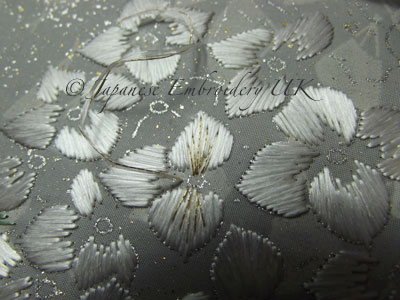 Bowl number 2, not quite right.  De-cored gold with .5F, still not right. 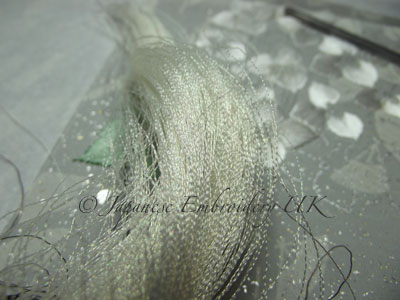 Bowl number 3, just right.  I raided my stash of metallics and found this slightly crinkly iridescent white.  I used one strand by itself and it was just what I wanted. 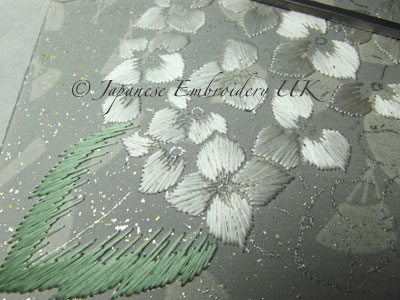 It's a bit difficult to see in the photos because it's so fine, but it add just enough sparkle and weight to the 2nd row of embroidery. 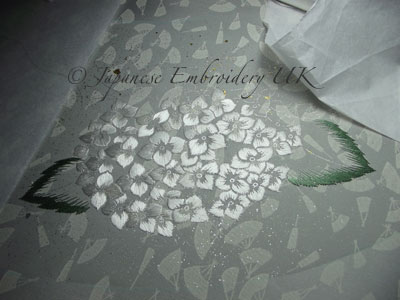 Then it was just a case of filling in all the flowers and leaves. 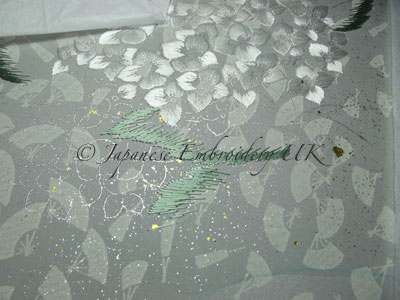 In order to give the design as light a feel as I could I deliberately didn't put in the veins on the leaves.  Since the silver line from the transfer is there I thought that was enough. 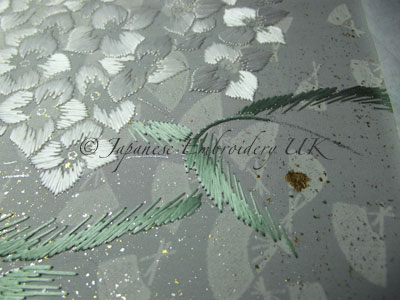 The one exception was this bottom leaf where the embroidery round the edge naturally morphed into the vein, but even that line fades away. 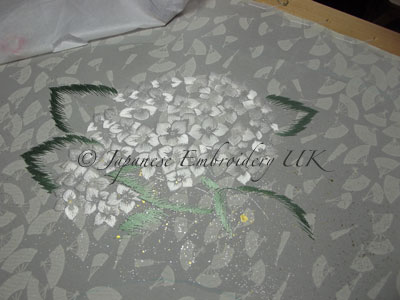 So here it is all done.  The photo below is an attempt to show scale, you can just see the darker shade of the overall fan shape which goes from edge to edge of the photo.  The completed fan will have a lot of open space with the embroidery over to one side. 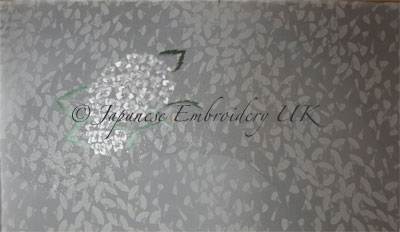 I have done some more work on a couple of other designs and will show those in some new posts shortly.