With the new Japanese Embroidery Academy up and running and most of the compulsory modules designed and stitched, I've been trying to come up with other options for designs for the students.  Turning our work into pictures is the usual but most of us have only so much wall space so other ideas needed.

I took a class with Midori Matushima a number of years ago to learn some gold leaf techniques, the completed piece was to be made up into a fan.  I decided to re-visit this idea and come up with a fan design for our students.  Midori kindly agreed to arrange for the finished pieces to go to Japan to be made up. While the cost is not cheap they are very beautiful and worth the money.

I looked for some inspiration in various books and on line and came up with a design of hydrangeas.  Part of this decision was the number of colours they come in, this will enable the students to develop their own colour ideas for a unique fan. For my version I also decided to have another go at some gold leafing, re-visiting those techniques learned with Midori. This will be optional for the students. 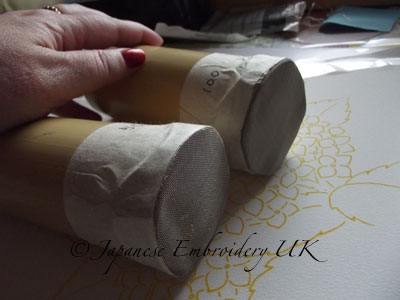 I had planned to use gold paste to highlight the leaves but my first attempt was a complete failure so I decided to keep it simple, gold and silver sprinkles over the whole fan. The two bamboo sieves I have are in different grades so there is variation in the sprinkle sizes.

The gold or silver 'cut ends' go into the sieve and a little brush gently eases the metals thorough the mesh.  Tip, don't breathe on it or it'll float into the air and cover everything! 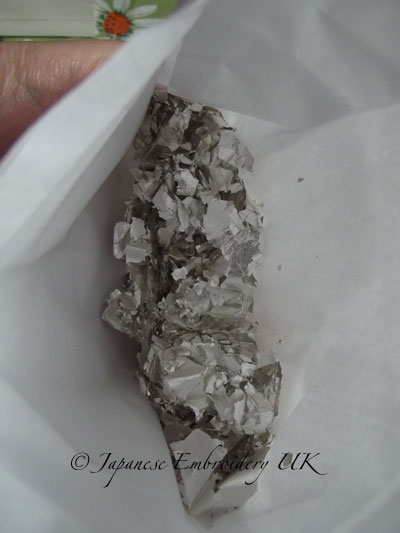 This is the silk lining for version 1 after glue and sprinkles have been applied. 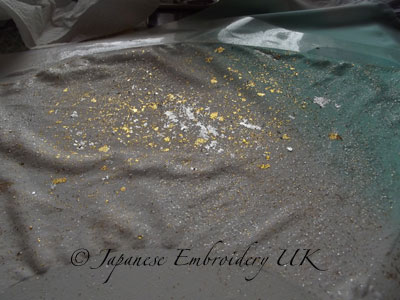 It looks much better when dried and pressed, but on going to frame it up I decided that the fabric just wasn't suitable it was far too stretchy. 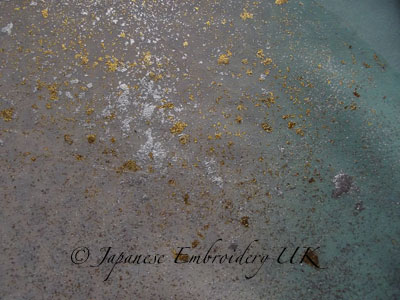 Having gone back to my stock of kimono silk all the other linings had strong patterns on them which wouldn't work for what I had in mind.  I have lots of other plain silk but were too thick to be made up into a fan so weren't suitable as a replacement.  I did what I usually do on these occasions and phoned Sensei to see what she's got in stock.  A few days later this fabric arrived, it's covered in tiny little fans and was just right, it's about a habutai weight (thank you Margaret). 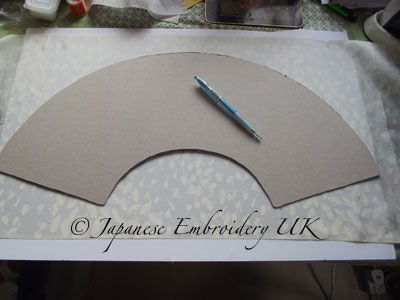 Version 2.  Spray mounted onto foam core I drew round the fan shape and using the screen I'd had made did the transfer. 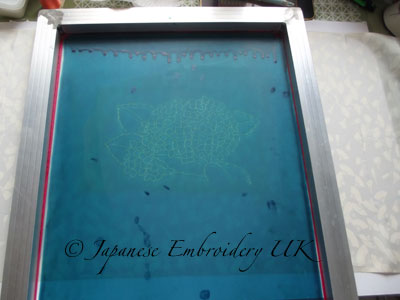 For the transfer I used the silver paste that Midori sells for gold leafing, I thought is would blend well with the sprinkles. 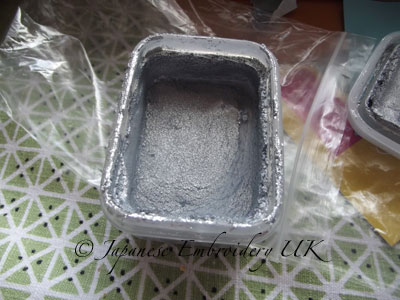 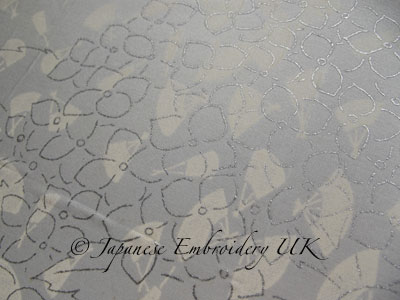 I masked out the fan shape and prepared the sieves with the cut ends making sure everything was close to hand.  The glue dries very quickly, so no time to stop.  After spreading the glue over the whole of the fan shape I gently rotated the sieves over the area. I've put more in some area than others and put more of one colour than the other on some areas as well.

The glue does change the colour of the fabric, in this case id didn't matter as the whole piece was having glue on, but it is something to bear in mind if only one section of a design is going to be gold leafed like this. 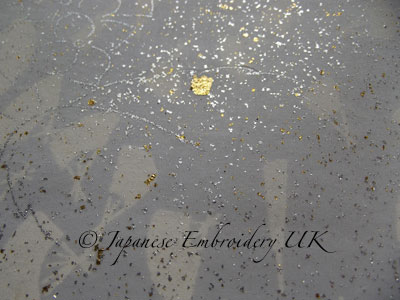 I let the glue dry for just a few minutes, removed the mask and put a plain white cloth over the whole fan shape, this was then pressed with a hot iron.  A few sprinkles have come off as I've been stitching  but on the whole it has worked very well, I'm very happy with version 2. 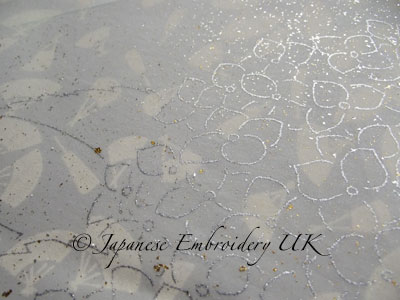 I have started the embroidery on this now and it is looking very nice. I'm up against a deadline on this one as it's got to be done by the end of March in order to go to Japan for making up, I hope I make it. More in the next post.