On my last post for the Five Fans design I mentioned I'd been trying flat silver with varying degrees of success.  We don't often use this type of thread in traditional Japanese embroidery and when we do it's generally in a small area or as an accent. Of course I decided to be different and wanted a foundation of flat silver.

One of the five fans is decorated with a moon and fireflies.  I wanted to moon and the sky to have a strong contrast and was interested in doing more with flat metallics since I have these to play with (between you and me I have more than this, I just don't have any photos).  These are flat metallics used in weaving nishijin fabric, they come in lots of different colours so give much more choice than just shades of gold.  I've got some ideas for using this in our new JEUK Modules but I need to understand more about how it works before I inflict it onto students.

I've got lots of lovely colours but none in a plain silver so before class in March I emailed the other tutors to see if anyone had any flat silver.  Sure enough when I got to class there were various choices to look at.  They were all very shinny which wasn't what I wanted but in the absence of any other choice I had a little play.  First I started with the pure silver colour, too much, then I tried a pale blue/silver as in the photo below. I quite liked the colour of this one but it was still too shiny.  I then tried a combination of the silver and blue/silver but didn't like this either. They were all to shinny which wasn't the effect I wanted. 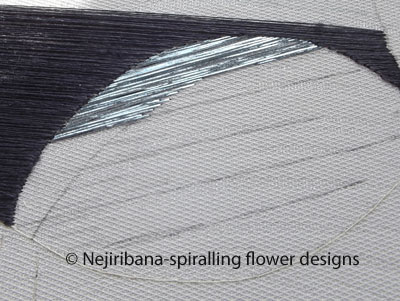 The moon shines of course, but with reflected light and it was this much more subtle effect that I was trying to capture.

Enter, stage left, Julia!  She'd found some flat silver on eBay and had bought it without knowing for sure what she'd use it for.  In the bag for class it went to show it round to us all. It was Perfect.  A subtle matte silver with an almost mottled effect. Beautiful.  Not knowing how much I'd need she very kindly allowed me to bring home the reel so I could use what I needed. Thank you Julia.  This is one of the things I love about our classes, you never know what people will bring with them and everyone is happy to share their goodies. 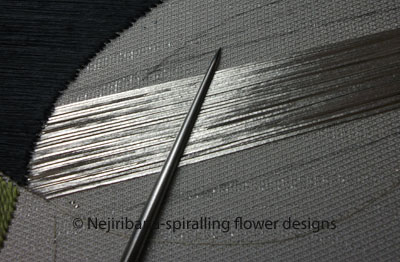 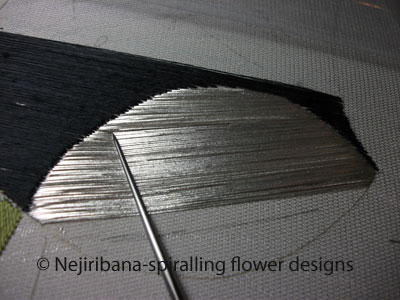 All the silvers I've tried on this piece are synthetic.  I'm not sure that real silver is available and in any case I'd be worried about it tarnishing over time so the synthetic is better.  Unlike the real flat gold I've used before this is slightly stretchy so you have to take care when stitching not to pull it too much or it won't spring back into shape. It's also thinner that the flat gold it fits into a #7 needle easily, whereas I had to use my #10 or #11 needle before. 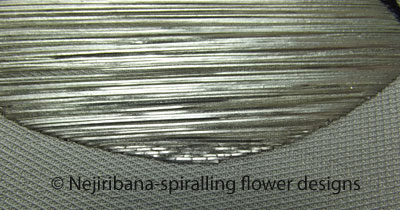 So off I went, happily stitching away and put in the whole of the foundation and then some holding threads, which I forgot to take a picture of, and started couching.  This is where I encountered another problem.  The silver is so smooth and slippy that the holding threads moved the foundation. Never mind I thought I'll be able to fix it when I couch it down.  I was wrong!  The movement in the threads and the very slight gap caused by putting the couching stitches in messed up all the spacing.  I only did a few rows as you can see before I realised that it wasn't going to work.  I took the photo above after I'd taken out the holding threads, you can see how much give there is in the silver. 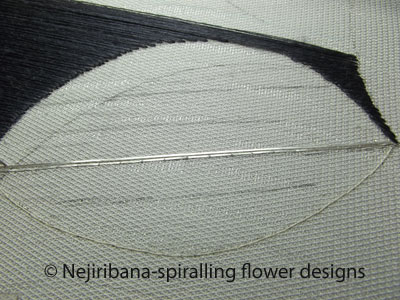 I spoke to my tutor via skype and we discussed various options. One was putting the temporary holding closer together. I tried this but encountered the same problem as before.  We also discussed the couching thread I was using.  It was a very, very fine silver thread which hardly showed up at all, a great effect but we decided it just wasn't strong enough to hold down the silver.  By this time I'd decided I wasn't going to be able to save the work I'd done so out it all came.

The solution in the end is to couch it as I go.  I'm putting in one stitch then a pin head to hold it firm, and then couching it with one of Midoris couching threads.  It's a slight compromise on the couching because I didn't want it to be seen but I think it'll work out. 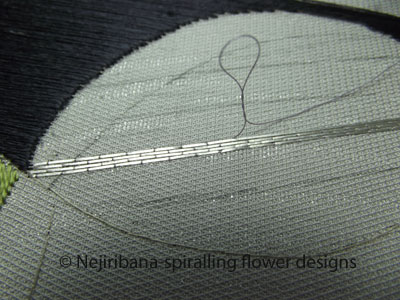 I've learned a lot using this flat silver, it hasn't put me off using flat metallic again, it does give a beautiful effect which can't be created with other types of threads.

For anyone interested in times for this, I've started tracking projects using Toggl timer which I discovered via Susan on Plays with needles, I forgot to switch it on a couple of times, the timer says 27.5 hours for the whole project and almost 6 hours for the moon so I'm guessing about 9 hours in reality.