Another class has been and gone, another horrid cold also been and gone.  Back to work tomorrow so time for a very quick update .

I travelled south for class a couple of weeks ago, this time as a student. With changes to work I wasn't able to go last year so it was nice just to be able to sit and stitch with everyone else and catch up on what they were doing.

I got work done on all three pieces and they are all very near completion.  Today, Five Fans (almost finished).

The original idea for the moon fan was that it would contain a moon and fireflies.  It's been so long since I started the embroidery and even longer since I did the design that I'd gone off this idea but I did want to put something extra on.

First I put some knots in using the same thread used for the moon. Didn't like this so I tried some crosses at the intersections of the holding thread. Almost right. I then turned them into stars and really liked this. 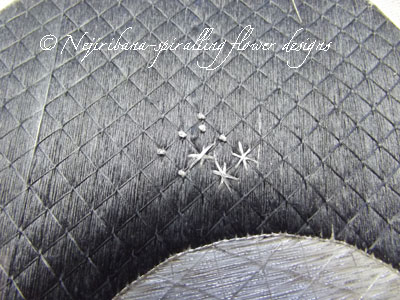 They went in by eye at random, different sizes and angles and just kept going until I thought there were enough. 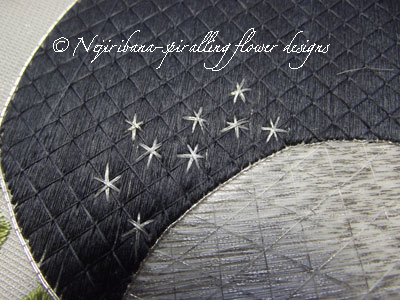 What is so nice about class with sensei and all the experienced embroiderers is that I can get second and third opinions.  The outcome was we all liked the stars and thought there were enough. 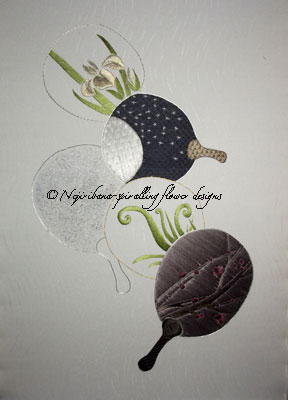 The other opinion was that I wasn't going to be able to get away with no holding on the plum fan.  I knew I wasn't but hoped in vain that sensei would disagree with me. I should have known better.  Since the foundation used weavers thread and not JEC or Midori thread the surface isn't smooth and flat, it's quite puffy.  I wanted to keep this texture but this did mean the holding was going to be difficult. After various discussions and ideas I raided the goodie box(s) for a metallic thread in a colour which was close enough to the foundation so as not to clash but different enough to create a feature of the holding. It was also suggested that I follow through the theme of the little stars, an idea I really liked. 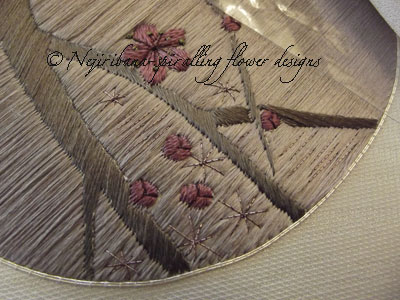 Some random short stitch holding later it was completed, but I still felt it was not quite right but couldn't put my finger on what it was. It was put to one side and I moved onto Grapes and Leaves.  On preparing these photos for the blog I can see I've done the stars with four stitches rather then three as on the moon fan.  They will be changed and we'll see if that fixes it. 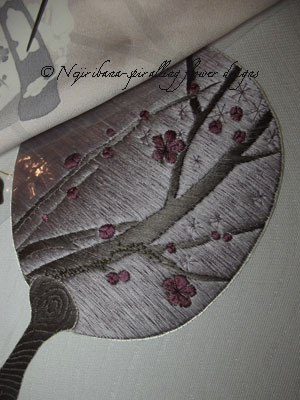