Things I noticed in class

Just back from a successful class in Garstang.

Things I noticed were, 1. beautiful work.

All the students are making good progress on their pieces.  They are working on a mixture of JEC and JEUK pieces.  A small sample of the work included a stunning Karahana in silver on black.  I took a picture but sadly it didn't come out well. Two sensu are on the go, one almost finished and one just started, both looking wonderful.  Some beautiful red maple leaves for the JEUK module 8 in fuzzy effect are coming along very well, and some very plump red and gold nandina berries from a JEUK challenge piece sprouted very well in the sunshine.

There were 15 students in all, with 14 different designs being worked on. Hard work for the tutors but it is so satisfying to see the students progressing well and such a joy to see them achieving so much and being rightly proud of their work.  It makes me very happy to be part of the JE family. 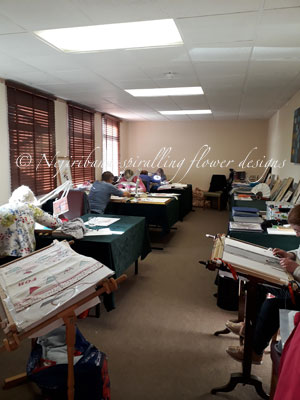 We gave the students previews of new designs for JEUK, one of them being my Hydrangea Fan and a second design of a cherry fan which has not yet been embroidered. Two of the students have taken the plunge, one is going to do the hydrangea and the other the cherry. Exciting. 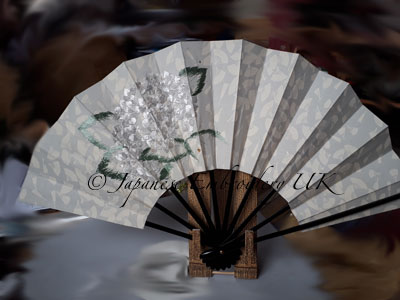 We also had a preview of the work done on two JEC phoenixes. Stunning.  Not my style or anything I would ever want to stitch but they were amazing.

A number of years ago I bought this traditional Japanese sewing box. Originally it held all my kit, these days I have to carry extra boxes when I go to class as I seem to have more stuff!! 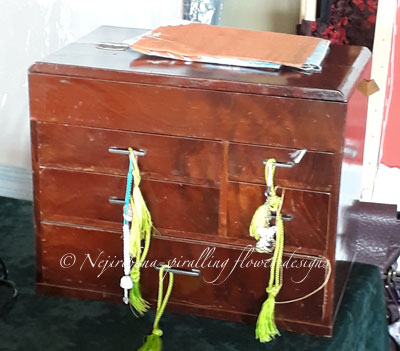 During  this class I suddenly became aware of just how many of us are using these traditional Japanese sewing boxes.  It's lovely to see them getting a second lease of life here in the UK and being used and loved by their new owners. 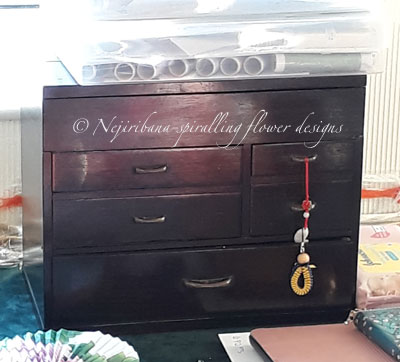 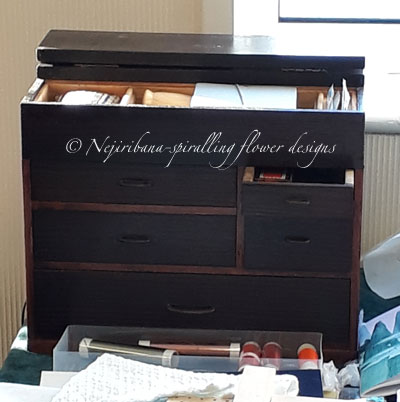 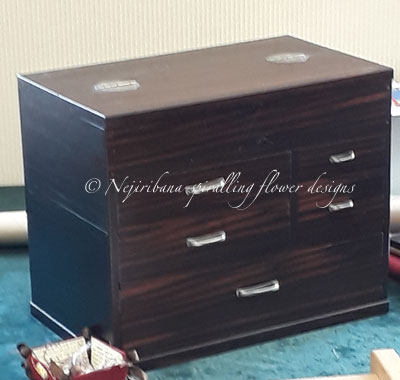 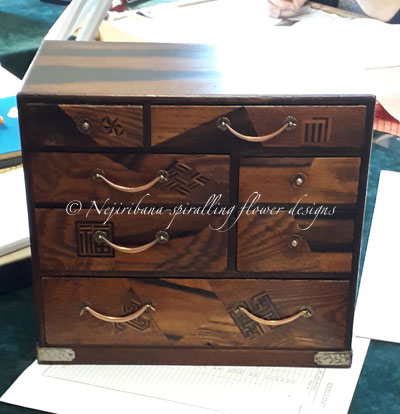 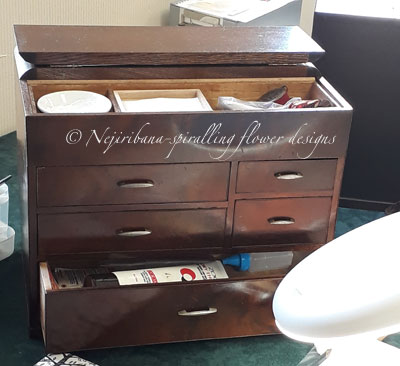 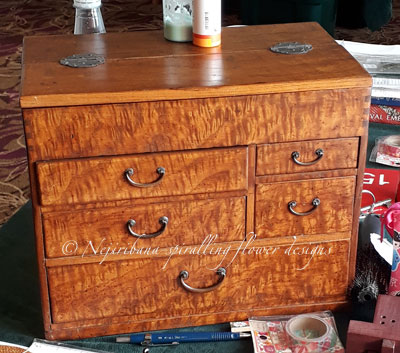 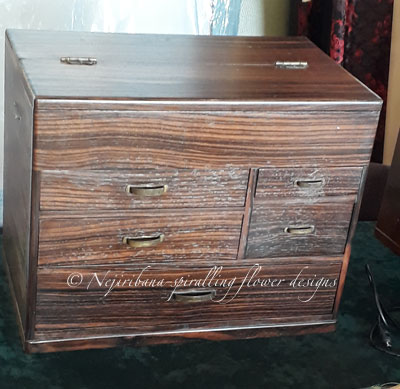 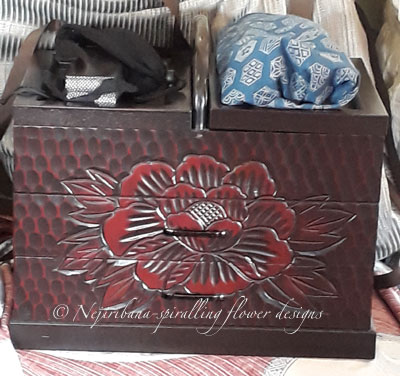 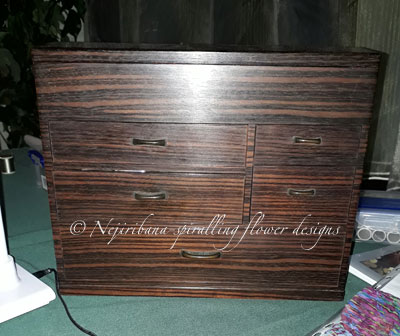 Other beautiful boxes in class included this lovely piece embroidered by Carol-Anne and made up in collaboration between her and Michiko. 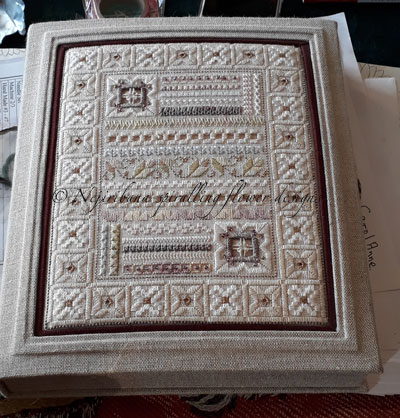 Michiko had her own lovely box with her which she made especially to hold her silks for JE.  It is always much admired when she brings it to class. 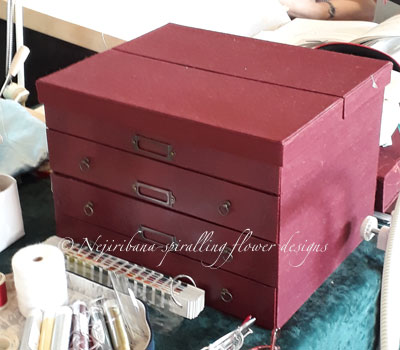 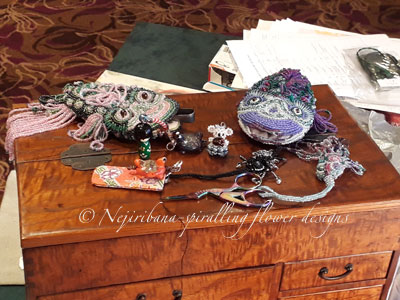 Edward scissor fish and his sibling Edwina visited each other during class and were joined by other friends.

The hands are the exit of the spirit - Master Saito

I've always noticed hands, they are so expressive and tell you much about a person.  During class I took pictures of just a few of the hands that were creating beautiful work. 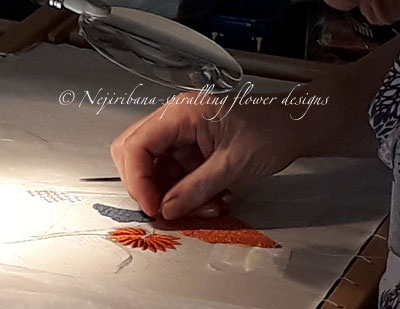 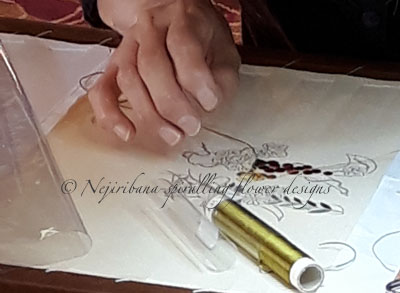 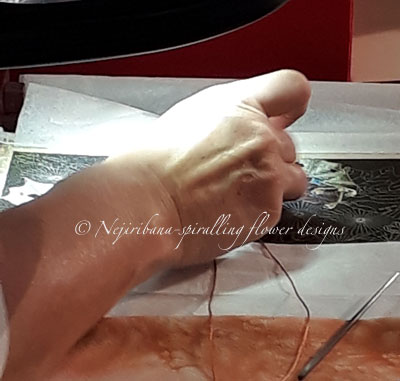 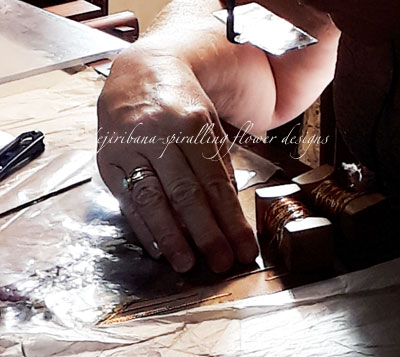