It's been a while since I visited this piece but I need to get back to it as I've got too many pieces on the go.  I try to have only two pieces on frames at one time but at the moment there are three.  Plus I've recently taken on two pieces which came from our JE friend Jennifer who passed away the year before Sue.  Jenny had given all her Japanese embroidery and beading things to Sue and now the stash of unfinished and un-started pieces from them both has come to me.

I took the pieces to our classes where they were offered to students old and new.  They have given generously and we've raised hundreds of pounds which Sue's daughters are donating to the local hospice.  I am sure that both Sue and Jenny would be very pleased with this and even more pleased that their pieces are being embroidered/beaded by their friends and fellow students.  I've taken on two pieces which are started, Samurai Helmet and Hiogi.  I'd really like to get them finished as soon as I can but I need to get some things off frames first which is why I've got back to this piece. 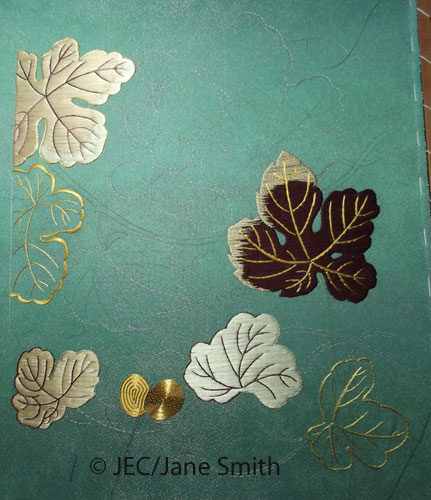 When I last worked on this it looked like this.  I continued by doing some of the outline on the large leaf on the right. Part is line of staggered diagonals and part #4 gold.  I didn't want to couch the gold with red couching, there is no other red in the colour scheme so I thought it would look odd, I tried gold couching but I didn't like that either.  In the end I used a brown silk couching of Midoris, which worked well.

I then made a start on some of the other grapes.  My original plan had been to use flat gold for these to introduce some variation but I wasn't convinced by the colour or the technique so I abandoned that idea.  Instead I put in some cotton padding, covered it with orange silk and embroidered twisted gold over the top. 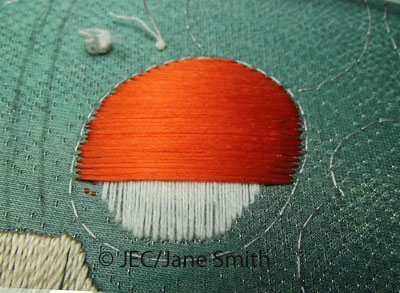 I think I like this, but need to get some more of the grapes done to decide if it works.  I may still re-visit the flat gold or abandon both ideas and go back to couched gold.

Next on the list was the largest leaf on the design which is about 6 inches across.  I decided that all that brown was too much and wanted to break it up a bit so I introduced a pale gold to the flat foundation. 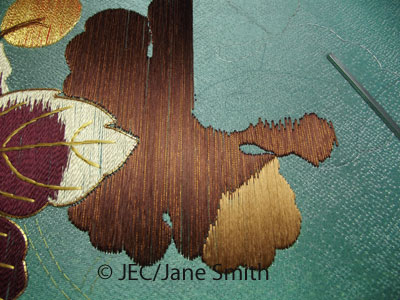 This leave has holes in the middle and ragged edges as though it's a bit battered. 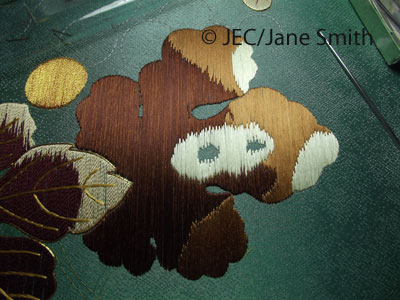 I overlapped the stitches between the colours to give random edges. 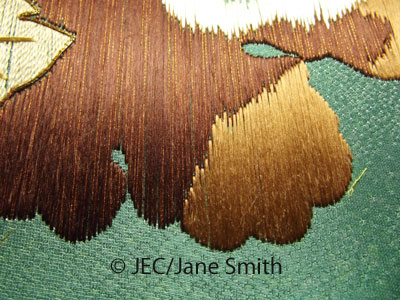 With a .5 strand of flat silk I went over the edges to blur the edges even more between the colours. I'm going to do some more of this, specifically on the edges to give them a rougher look.  I really like how this is coming along now and feel as though I've got to grips with the whole design so it shouldn't take long to complete (in JE terms that is). 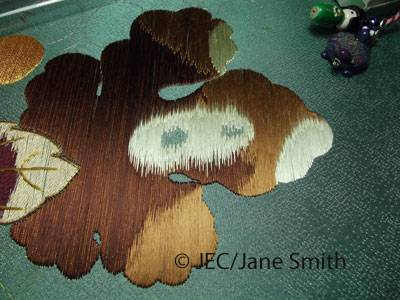