Life has been busy at work and home so I've had little time for stitching since I last posted.  But I have slowly been working on all three designs which are on the go at the moment.  Today it's time for a bit of a catch up on my new chrysanthemum design.  In my last post Flash had been 'helping' with the tracing. 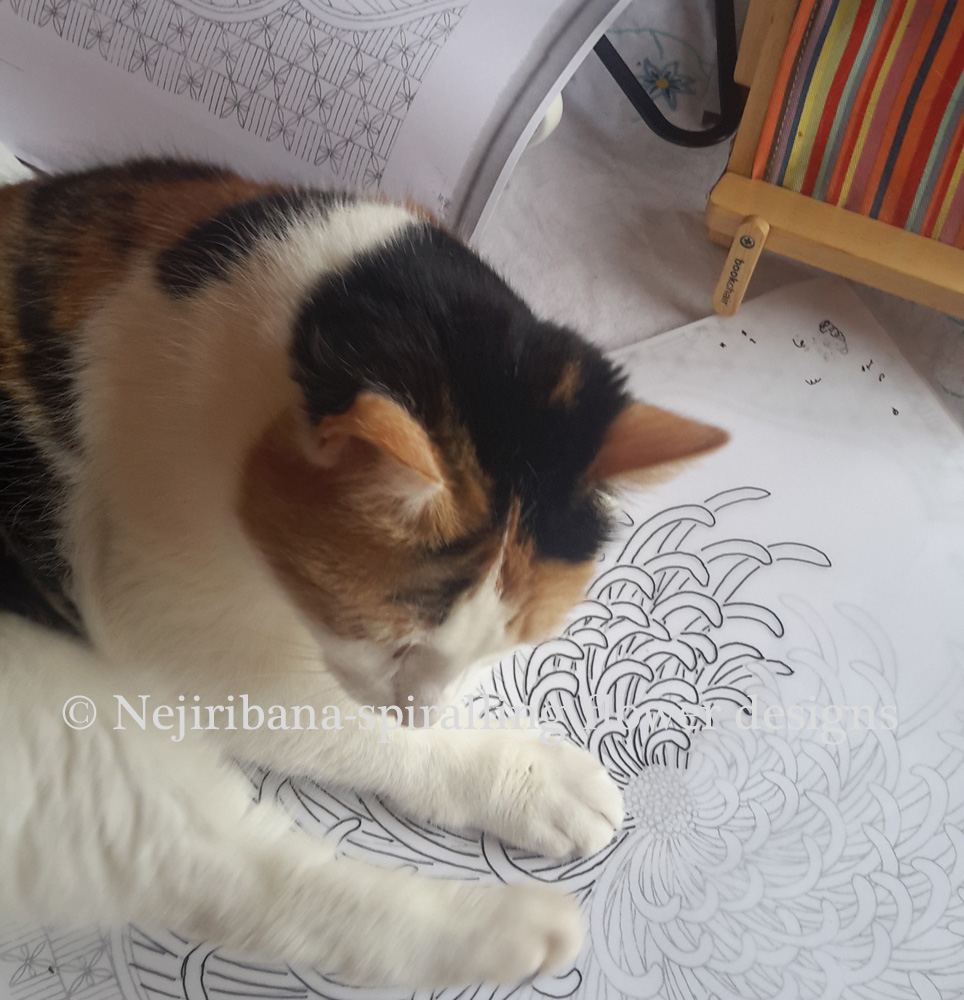 Once the helping stopped, I was able to complete the tracing and transfer it onto the silk.  This won't take long I thought to myself.  How wrong I was. 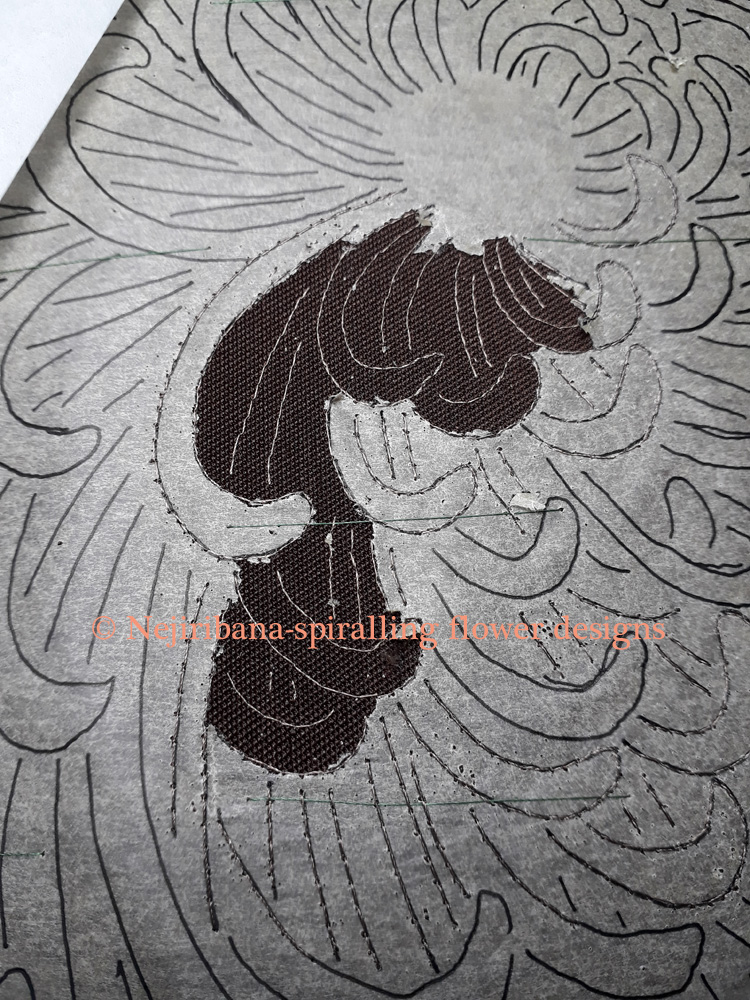 I transferred the design using a line of held thread as I find it gives a much nicer line and a good edge to the final embroidery.  I did get bored with all the outlining and put in some silk on two or three petals.  but that had to come out again when I decided I wanted to put gold leaf in the centre of the flower. 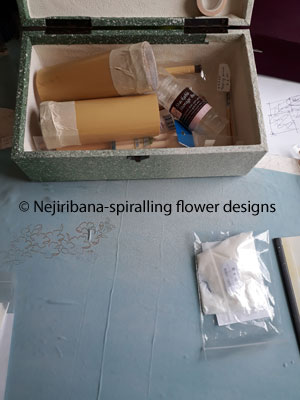 It's a long time since I've worked with gold leaf rather than gold paste so I had a bit of a practice before I moved onto the real thing.  I dug out my kinsai equipment and some kimono silk to practice on and banished the cats outside.  The last thing I wanted was their furry little paws walking over the gold leaf!  I then cut out some shapes in sticky backed plastic, placed them on the silk and had a play around with different shapes and thicknesses of lines. 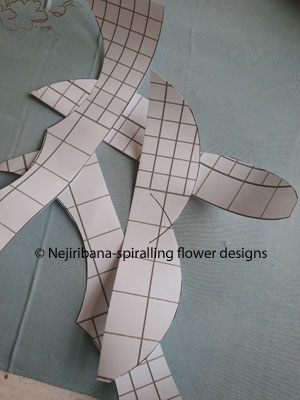 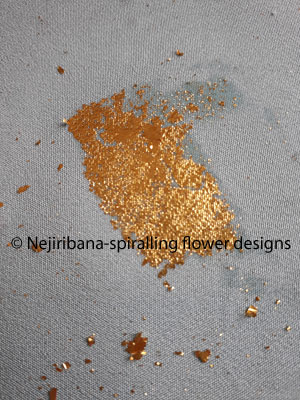 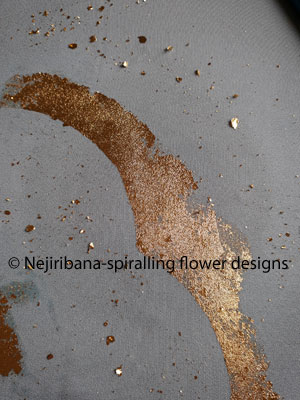 This was the kind of idea I decided to go for. 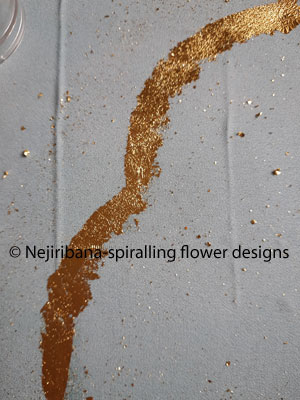 First I spread glue over the centre of the flower so it extended into the petals.  The embroidered petals will extend into this area and I'll fill the centre with knots, so I can just see glimpses of the gold leaf.

The original gold leaf was a bit solid and regular, so I used a small brush to remove some to make the shape random. 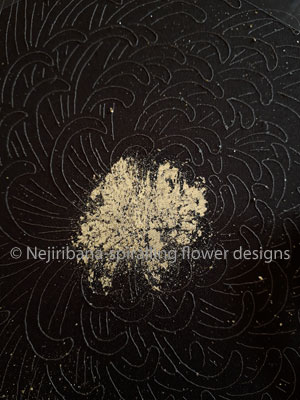 The edge of the design was masked off and a line of glue pasted round the edge and the gold leaf was added. 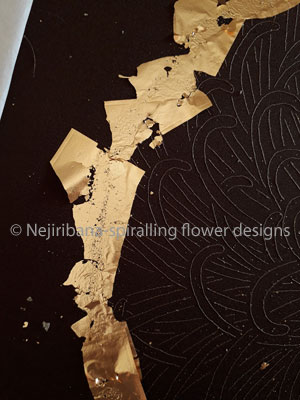 Removing the excess leaf has left lots of little sprinkles on the fabric, but since this is not held by glue it will gradually disappear.  Even if it doesn't all go I think it'll add a nice effect so I'm not worrying about it.  So, 40+ hours and almost an entire reel of couching thread later, the design is transferred and the gold leaf is complete.   I have made a start on the embroidery, but more about that next time. 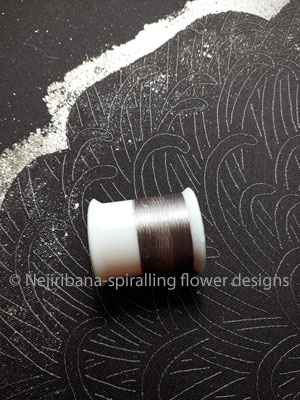 PS, the cats have been allowed back in