Though it's been a bit quiet on the blog for the past few weeks, things have been going on behind the scenes.  Slow progress is being made on the module 8 fuzzy effect piece, I've been to class, and I've started work on a new design (well not quite new, the design was done a couple of years ago).

This spring class was held not in a hotel but at the lovely Symondsbury Manor near Bridport in Devon.  The surroundings were very peaceful, full of bird song and sunshine, except for George's barking when he was being taunted by the resident chickens! 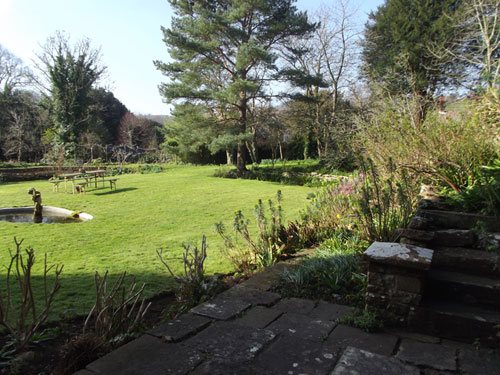 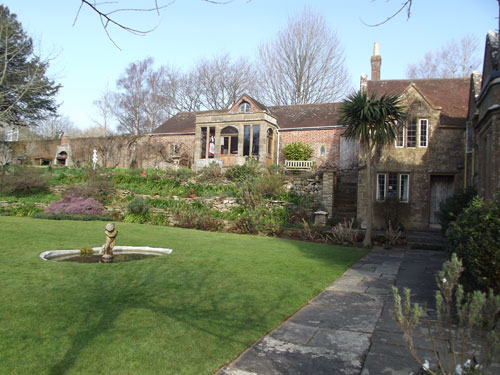 Before I went to class I'd started embroidering a design of five uchiwa fans each decorated with its own motif.  I completed the design a couple of years ago but hadn't started the embroidery.  After I framed up and started looking at colours I decided that I would re-visit all these lovely weavers silks that I got a while ago. 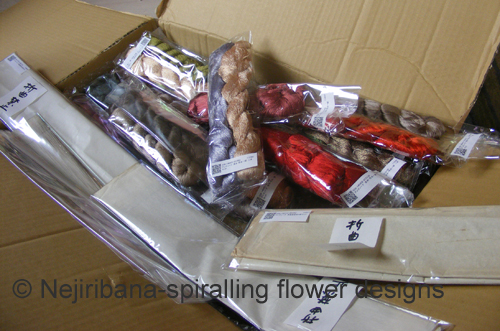 I've used these before on a couple of different projects, the colours are very rich and they are lovely to work with.  They come in various thicknesses, some very smooth, others have a bit of a slub and some come with a twist.  I spent some time choosing colours and deciding which techniques to use on each fan. 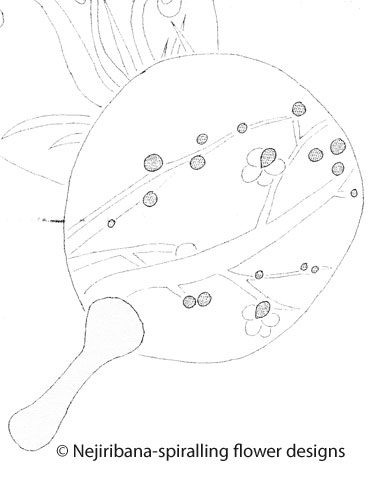 I started first with one of the handles, putting in a wood grain effect. 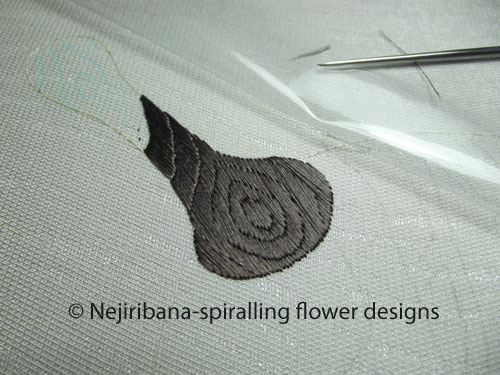 The colour is a kind of brown/purple so I chose a soft mauve for the foundation of this fan. I had to re-shape the fan slightly as one side was flatter than the other.  The mauve gives a very good foundation, the dye seems to be a little uneven but I like it as it creates a nice texture to the fan. 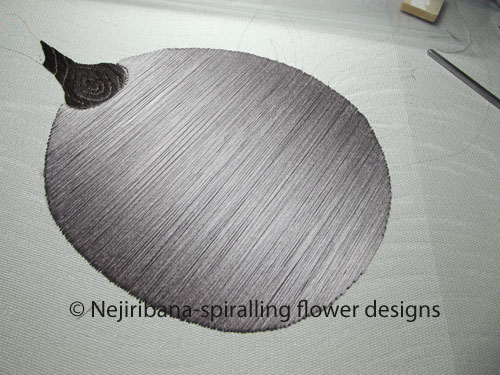 I put in some temporary holding and transferred the design of plum blossoms using stitched paper preparation. 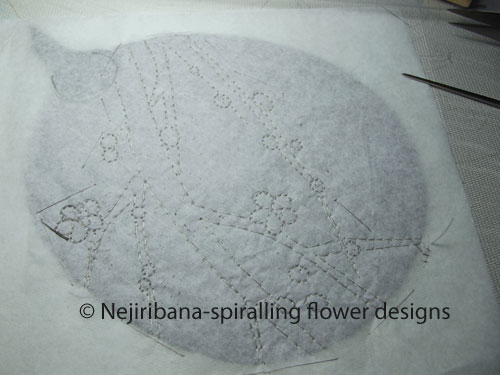 For the flowers and buds I used a plum shade. This thread already has a soft twist so I used it as it was with some self padding for depth. 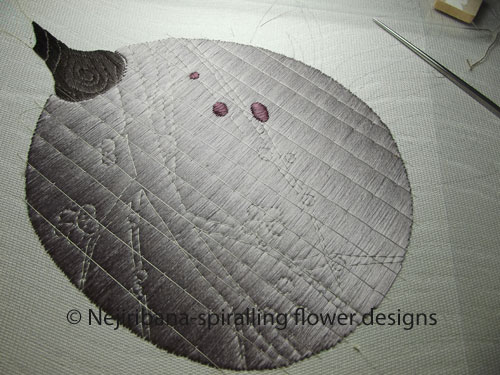 I'm still deciding on how to embroider the trunk and branches so will come back to these later. 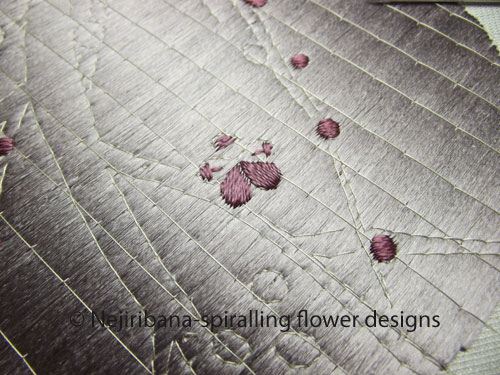 Next in line a design of ferns.  I decided against a foundation on this fan, I wanted it to be very simple with just the angles of the stitches to give texture.  This green thread also has a soft twist in it which gives a nice texture. On the main leaf I put in one layer of self padding. 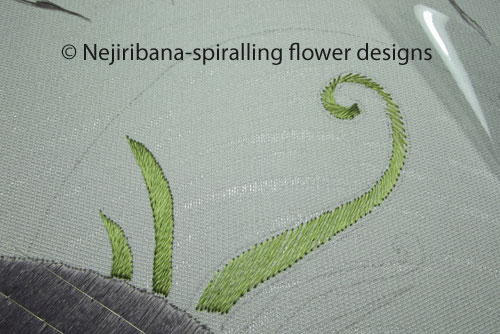 The top layer was worked in a clockwise direction round the curve which meant working in one direction then the other, with the two sections joining in the middle. 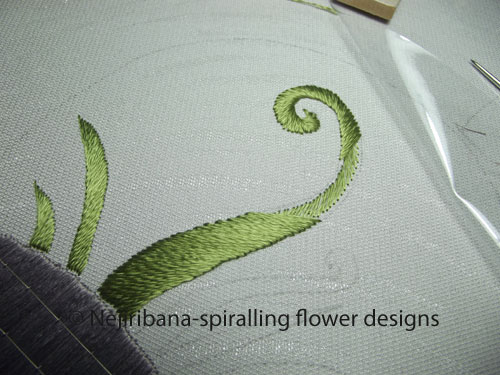 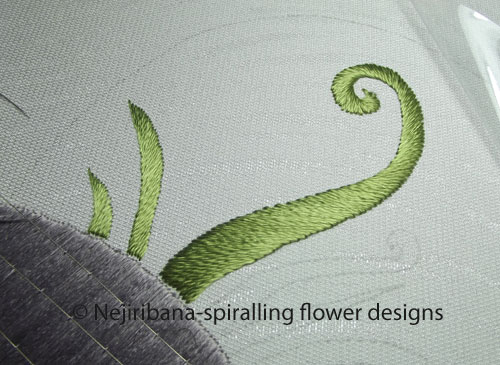 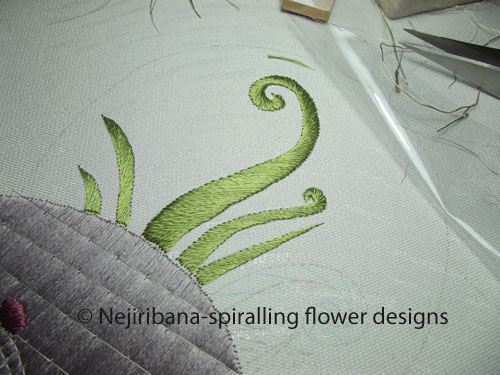 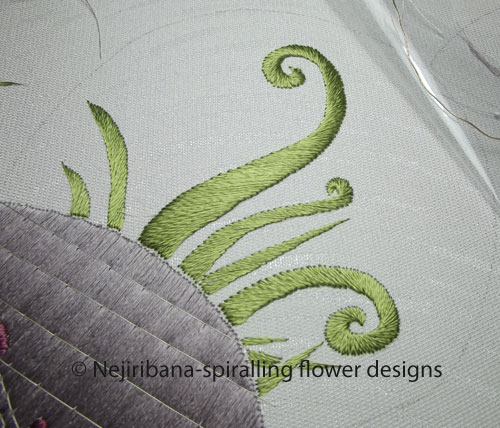 I did more on this piece during class, including some experiments with flat silver but will save that for another post.