Before I go and tackle the black hole which is the cupboard under the stairs! an update on a work in progress.

As readers of the blog will know I'm one of the tutors and designers for Japanese Embroidery UK and over the last couple of years we have been designing our own modules for teaching JE, you can see all the modules here. The plan is to have at least two designs for each module, I'm currently working on the second of the module 8 designs which is in fuzzy effect.  It is hard going on the eyes and I can only work on it when the light is good enough.  To give myself a break I decided to attempt one of the cord designs from module 5.  This is a lovely design of butterflies over a stream all worked in cords which has been designed by my Sensei.

As far as thread and techniques go I have followed the instructions for the module, so I'm not straying too far from the path.  The transfer was done with chaco paper which has then been outlined in couching thread.  I've started using the couching thread we get from Midori for outlines, it's thinner than the JEC couching and I think it gives a nicer edge. 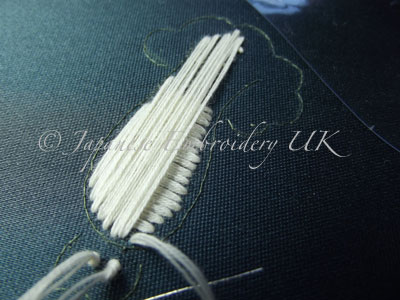 So, two layers of padding cotton for the tassel followed by a 3-1T.  There had been some discussion about tassels, I forget where as it was a number of months ago, and different ways of stitching them so for this one I decided to put the twisted thread in at an angle rather than horizontal or vertical.  I wasn't entirely sure about this once it was in, but I left it. 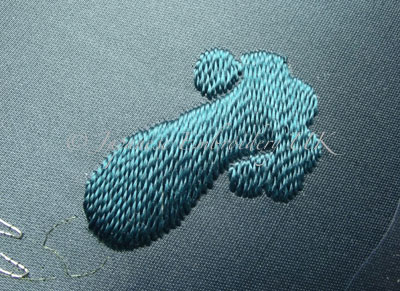 Gold work is my least favourite bit of JE but I do like adding various metallics as an accent.  JEUK have managed to source a lot of different fancy metallics recently and while I don't have as many of some of the other tutors, you know who you are!, I do have a few.  One of them is a very bright variegated #1.  The colours don't blend into each other but are in distinct sections so I never thought I'd use it put it was so pretty I couldn't resist getting a few metres.  My first thought was to use silver for the lines on the tassel but when I got out my metallics I noticed that one of the colours on this one is almost the same as the silk so used it instead of silver.  I'm glad I did, it blends nicely and adds just a touch of colour and sparkle, and who doesn't like a bit of sparkle. 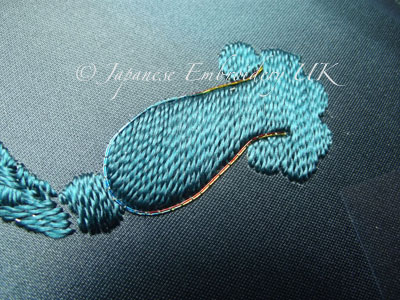 #1 HH for the outline and the lines. 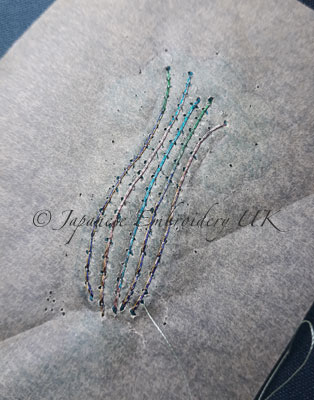 Taking out the paper is always a bit of a task and I managed to catch one of the threads while doing this.  Very annoying but I think I might be able to rescue it so I've left it for the moment. 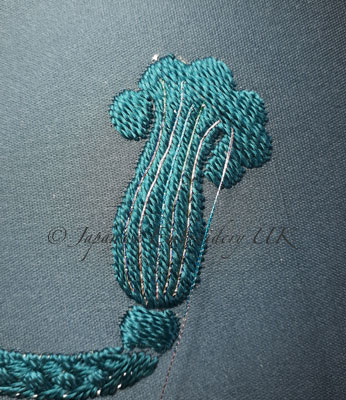 It still needs some knots round the end and a couple of holding lines, but looking good.  I like the diagonal lines much more now the metallic us in over the top.  It seem to give more movement. 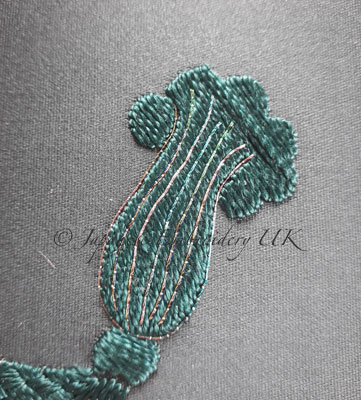 Each of the butterflies have tassels on their wings and at the end of the cord which form their antennae.  These red tassels are from the larger of the two butterflies.  I've used 2F and self padded for these to match the rest of the butterfly.  There are colour changes in the butterfly body which has been reflected this in the tassels. 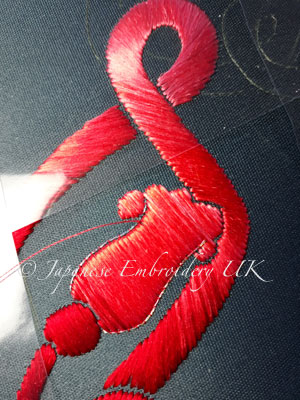 A different #1 variegated metallic was used for the outline and lines. This a shell silver, brighter than the usual but still quite subtle. 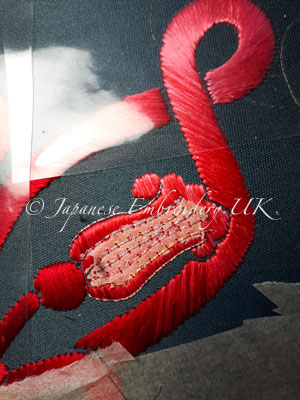 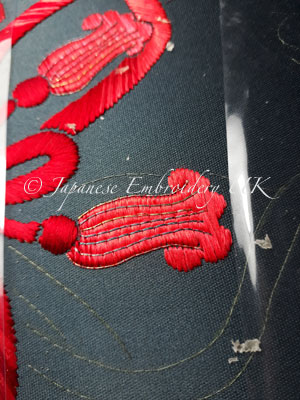 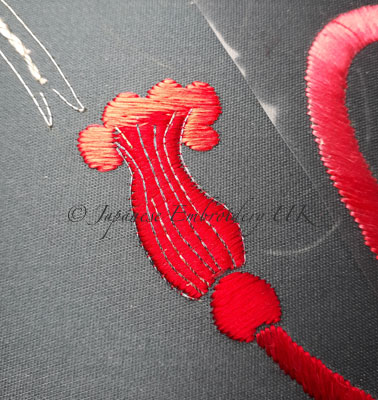 Again I still need to put some knots round the bottom of the tassel, but I'm really liking how these are looking. In the picture below you can see how the antennae and cord tassels look together. 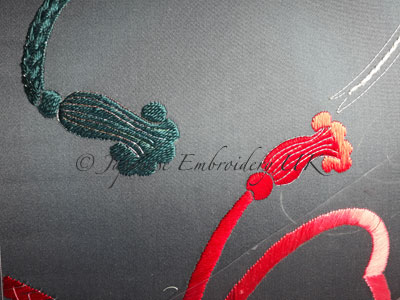 Next time, working the butterfly.